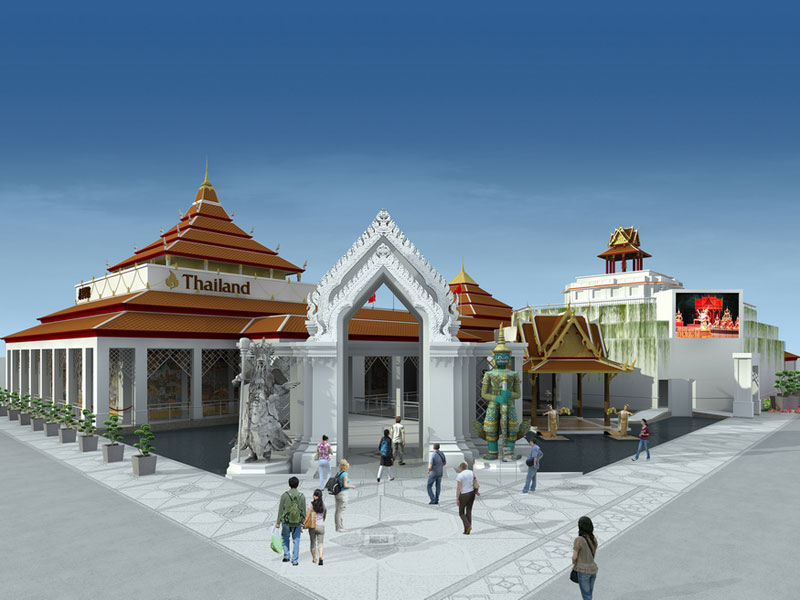 Thai Prime Minister Abhisit Vejjajiva is arriving in China this afternoon, having left Bangkok Saturday morning to attend Thailand’s national day this weekend at the “World Exposition 2010” in Shanghai, China and to officially offer to host the 2020 World Exposition in ten years.

As the expo organizers this year scheduled September 5 as Thailand’s national day, representatives from Thailand will promote Thai culture such as Thai dancing at the expo’s center stage tomorrow.

On this occasion, the premier said Thailand would offer itself and announce its readiness to host the World Expo ten years from now.

Thailand joined this year’s Expo under the theme “Thainess: Sustainable Ways of Life”, displaying exhibitions and showcasing Thai culture at “The Thailand Pavillion” in a space of over 3,000 square meters.

The Thai pavilion at the Shanghai site cost 950million baht, the most the country has ever spent for a World Expo. Its theme will be "Thainess: Sustainable Ways of Life".

Thailand has prepared its readiness to host such event, the premier said, by having related agencies to select a suitable province for the World Expo, with Chonburi, Ayutthaya and Chiang Mai are the three choices.

He added the announcement on which province is selected will be made around mid-2011.

“The World Exposition will help stimulate the Thai economy. Despite the high investment, there will be a great number of visitors. The important thing is it will promote the image of Thailand,” said Mr Abhisit.

via PM Abhisit arriving in China to attend World Expo in Shanghai.

Thailand has a population of some 66m people making it one of the 20 largest populations in the world and is within 2 hours flying time of 4 billion people. Thailand is strategically and economically placed to become one of the worlds great economies as China, India and the rest of Asia develop.

Thailand produced 1m cars this year and will produce 1.2m cars in 2010, mostly sold in regional markets. Thailand’s food and manufacturing industries are growing at double digit rates year on year.
AFTA is set to bring a whole new market in the coming year, the ASEAN Free Trade Area (AFTA) is a trade bloc agreement by the Association of Southeast Asian Nations supporting local manufacturing in all ASEAN countries. The AFTA agreement was signed on 28 January 1992 in Singapore. When the AFTA agreement was originally signed, ASEAN had six members, namely, Brunei, Indonesia, Malaysia, Philippines, Singapore and Thailand. Vietnam joined in 1995, Laos and Myanmar in 1997 and Cambodia in 1999. AFTA now comprises ten countries of ASEAN. All the four latecomers were required to sign the AFTA agreement in order to join ASEAN, but were given longer time frames in which to meet AFTA’s tariff reduction obligations.

Baht on higher grounds : good or bad for Thailand ?