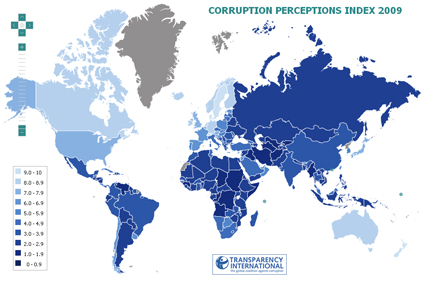 This year, Thailand has captured headlines all over the world, but not always for the right reasons. The political unrest that has gripped the country over the past several years is undermining its economic competitiveness.

After the unrest turned deadly earlier this year, travel warnings from 40 countries, cancelled flights, and declining hotel bookings all sent a strong message to the Thai leadership – get your act together or risk losing the economic growth driven by the booming tourism industry.

At the epicentre of the protests, explosions and political reshuffling in Thailand is an age-old problem of many developing countries – corruption. As the sides continue to trade allegations of corrupt behaviour, the need for solutions is evident.This autumn, the spotlight will be on Thailand to take serious steps to fight corruption.

Thailand's No.84 position this year means the country is being perceived as increasingly corrupt.

From November 10-13, the country will host the 14th annual International Anti-Corruption Conference, which will bring as many as 1,500 experts and anti-corruption activists from more than 100 countries to Bangkok. As the global anti-corruption movement discusses the successes and failures of efforts to curb bribery, Thailand’s government should use the opportunity in November to move its own anti-corruption agenda forward. The same advice applies to the private sector.

Thailand can learn something from other countries in implementing successful efforts to fight corruption. One lesson is that, as the local saying goes, “You can’t clap with one hand.”

In Bulgaria, the collective-action approach led to the establishment of Coalition 2000 in the late 1990s, which brought together over 100 prominent representatives from state institutions, non-governmental groups, the private sector and international organisations. This group came together to develop a plan to curb corruption, set benchmarks and follow through on implementation.The grass-roots coalition was so successful in raising awareness of the problem that the national government of Bulgaria recognised corruption as a strategic concern for the nation. Further, the government’s anti-corruption plan mirrored closely the proposals developed by Coalition 2000.

The second lesson is that corruption is much more than simple, common bribery. It can take many forms – from kickbacks and political favouritism to limited access to information, extortion and selective application of laws.In light of this, it is not enough to prosecute individual cases of bribery, although it is important in its own right. Successful anti-corruption efforts demand that we find the root sources of corruption and tackle its institutional underpinnings.If we talk about kickbacks in procurement deals, for example, we must ask the hard questions: What creates the lack of transparency in how procurement is conducted? How do crony deals circumvent the law?

Only by answering such questions we can begin to mount effective efforts to improve procurement.

via Fighting corruption in Thailand: help wanted from the private sector.

Thailand became a signatory to the pact in 2003. Ratifying the UNCAC could also help return ousted prime minister Thaksin Shinawatra to stand trial here in the near future or speed up the trial of well-known financier Rakesh Saxena, the roundtable pointed out.

All UNCAC signatories – 135 countries at present – are obliged to coordinate with each another on mutual legal assistance and asset recovery for crimes, even to the extent of extradition.

Dusit Nontanakorn, chairman of the Thai Chamber of Commerce, said the private sector is proceeding with cracking down on corruption among themselves, but the government should move in the same direction by ratifying the convention as soon as possible.

“It’s quite strange that we apply to be a member of the pact and we will be the host country of IACC but we have not yet ratified it,” he said.

Thai Baht: what can stop it from raising ?

While China’s biggest corporates are increasingly flexing their global muscle as the country’s economic and geopolitical influence accelerates, Bangkok is the 10th most popular destination for mainland firms expanding overseas. END_OF_DOCUMENT_TOKEN_TO_BE_REPLACED

With its strategic location in the center of ASEAN with emerging markets, including Cambodia, Laos, Myanmar, Malaysia and southern China, on its border, Thailand is well position to connect investors to new opportunities arising from the increasing border trade and the region’s rapid economic growth.
END_OF_DOCUMENT_TOKEN_TO_BE_REPLACED

Twenty years ago, day trading was the great new pastime for Americans, all of them tuned to the financial news and reports on the day’s newest crop of IPOs. END_OF_DOCUMENT_TOKEN_TO_BE_REPLACED