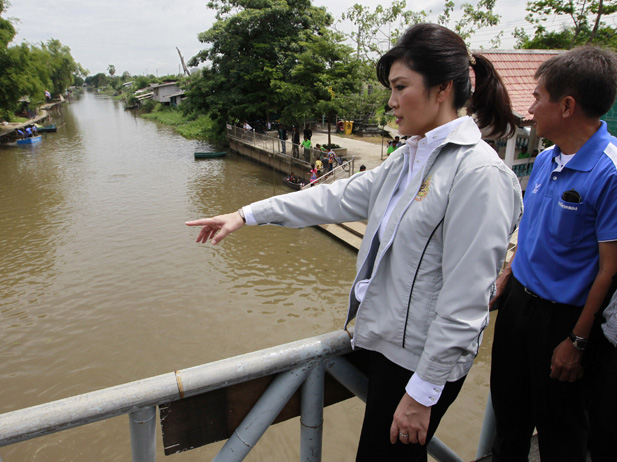 Last year, flooding in Thailand breached defenses across the country, killing 800 people, ruining many of the industrial estates on the outskirts of Bangkok, bringing the capital to a halt, and resulting in billions of dollars in damage.

The disaster triggered decisions by several major electronics components manufacturers to either abandon Thailand operations or open new operations to build disc drives and other parts in countries safer from flooding.

Last year, flooding in Thailand breached defenses across the country, killing 800 people, resulting in billions of dollars in damage.

Last year’s flooding was also horrible for the public image of the government of Yingluck Shinawatra, which appeared to be slow to respond, as compared to the army, which utilized the flooding, and its rapid response, to somewhat rehabilitate its image in the minds of many Thais after the army’s killing of at least ninety protestors in the streets of Bangkok in spring 2010.

Given the damage done by last year’s floods to the Thai economy, to the government’s legitimacy, to people’s health, and to the country’s long-term attractiveness to investors, one might think that this year Bangkok would be better prepared for flooding.

After all, though some meteorologists attributed last year’s floods to a once-in-decades event, the fact is that Thailand is one of the countries in Asia most exposed to negative impacts from climate change: Bangkok is built on swampy, reclaimed ground, and sinks into the water more and more every year. It is easily flooded, and even in “good” monsoon seasons water often accumulates in the lowest parts of the city.