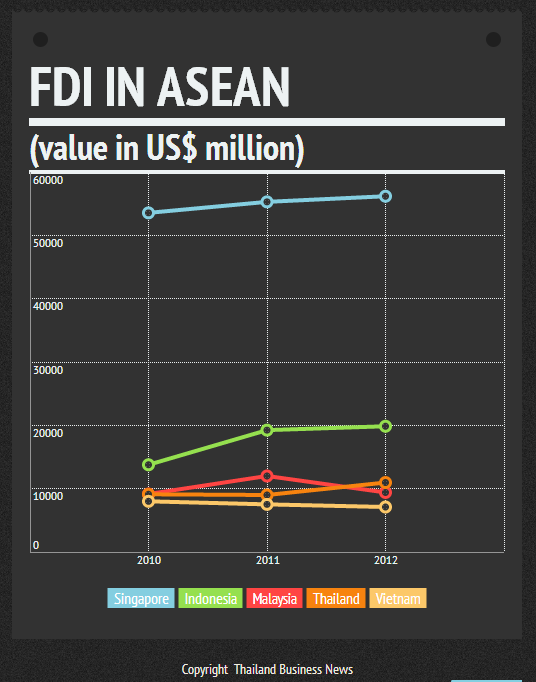 In this update, contributors from the Oxford Business Group share some interesting insights on Indonesia’s new foreign investment legal regime. This might be a wake call for Thailand, as the deadline for AEC is getting closer. Indonesia have raised foreign participation ceiling in some fields, enabling some key sectors to be wholly owned by foreign companies.

A shift of emphasis is under way in the regime governing Indonesia’s foreign direct investment (FDI), as the country moves to boost capital inflows in some areas of the economy through regulatory changes, while closing other sectors to international players.

The foreign investment updates, which mark the first changes to presidential regulations governing FDI since 2010, are aimed at driving up domestic participation in targeted economic sectors, particularly the energy and resources industries, and increasing Indonesia’s competitiveness.

Under the new regime, FDI ceilings have been raised in some fields, enabling key initiatives to be wholly owned by foreign companies for the first time. Other areas such as oil services have now been ruled out of bounds for investors. Opinions are likely to vary on how the changes could affect capital inflows longer term, though most analysts appear confident that overall investment levels should remain strong this year.

Indonesia’s new regulatory regime has enabled public-private partnership (PPPs) projects for seaport developments to be 100% foreign-owned for the first time, replacing a restriction, in place until recently, of 49%. Power station projects of more than 10 MW, and electricity transmission and distribution companies, can now also be wholly bought by international players. Land transport facilities such as bus terminals, which were previously limited to the domestic arena, are now open to 49% foreign buy-in.

The regulations have additionally increased the permitted FDI levels for pharmaceutical companies from 75% to 85%.

The drive to tighten up and, in some cases, rule out foreign participation is focused primarily on Indonesia’s hydrocarbons industry. Onshore drilling, onshore pipeline construction, and all oil and gas sector maintenance work have been closed completely to foreign interests. Offshore pipeline construction, together with geological and oil and gas survey services, which were open to 100% foreign ownership before, are now limited to a maximum 49% FDI input. Capital inflow levels for offshore oil and gas drilling developments have been reduced from 95% to 75%.

The regulatory overhaul has also reined in foreign participation across other sectors of the economy. Futures brokerages, waste management and plantation cultivation on properties of less than 25 hectares, which were previously open to 100% foreign ownership, must now include domestic participation of at least 5%.

Officials are confident that the regulations will not affect existing approved FDI developments, although the longer-term impact is likely to spark more extensive debate.

Foreign investment remains on track to eclipse last year’s levels, although momentum looks to be slowing. Foreign investment reached $6.2bn in the first quarter, up about 10% year-on-year (y-o-y), according to a report by the Investment Coordinating Board (BKPM) issued in April, but well below the 25% y-o-y growth notched up in the final quarter of 2013.

Mining and manufacturing made up the lion’s share of FDI for the first quarter of 2014, accounting for just over 50% of the total. Capital inflows in tourism also jumped sharply, with FDI accounting for $117.24m of the $130.13m invested in the sector during Q1.

Analysts are still upbeat about Indonesia’s foreign investment prospects for the rest of the year, despite an easing in FDI growth.

According to a research note from Deutsche Bank in mid-April, positive movements in a number of key indicators should whet the appetites of overseas investors. “Strong consumption demand, gradual easing of external imbalances and inflationary pressure, and a generally benign external environment have combined to engineer a substantial improvement in Indonesia’s outlook,” said strategist, Mallika Sachdeva.

A report by HSBC, also released at the end of April, concluded that while some of the ASEAN-5 countries could see lower investment, Indonesia’s improving economic indicators should keep it on course to maintain FDI growth. Indonesia’s FDI, HSBC commented, should remain well above those of all of its neighbours in the ASEAN-5, with the exception of Singapore. Of the ASEAN-5, only Singapore has outperformed Indonesia in recent years, posting a net FDI inflow of $56.17bn in 2012.

The report added that capital inflow into the region was likely to be more selective over the short-to medium-term, favouring countries with stronger fundamentals and stable political conditions, such as Indonesia or the Philippines. Some analysts have also questioned whether recent developments in Thailand, including the imposing of martial law on May 20, could prompt foreign investors to shift their focus to other parts of the region.

While Indonesia is gearing up for presidential elections in August, both candidates are seen as pro-investment, and a smooth transition of power is forecast which suggests a minimum impact on FDI flows.

With current FDI strong, Indonesia looks on track to equal or even exceed last year’s levels of foreign investment. While the regulatory shift could see a tailing off of medium-term FDI in the energy sector, higher spending in other segments of the economy, combined with increased activity by local firms looking to fill the gaps, should go some way towards maintaining investment equilibrium.

While China’s biggest corporates are increasingly flexing their global muscle as the country’s economic and geopolitical influence accelerates, Bangkok is the 10th most popular destination for mainland firms expanding overseas. END_OF_DOCUMENT_TOKEN_TO_BE_REPLACED

With its strategic location in the center of ASEAN with emerging markets, including Cambodia, Laos, Myanmar, Malaysia and southern China, on its border, Thailand is well position to connect investors to new opportunities arising from the increasing border trade and the region’s rapid economic growth.
END_OF_DOCUMENT_TOKEN_TO_BE_REPLACED

Twenty years ago, day trading was the great new pastime for Americans, all of them tuned to the financial news and reports on the day’s newest crop of IPOs. END_OF_DOCUMENT_TOKEN_TO_BE_REPLACED