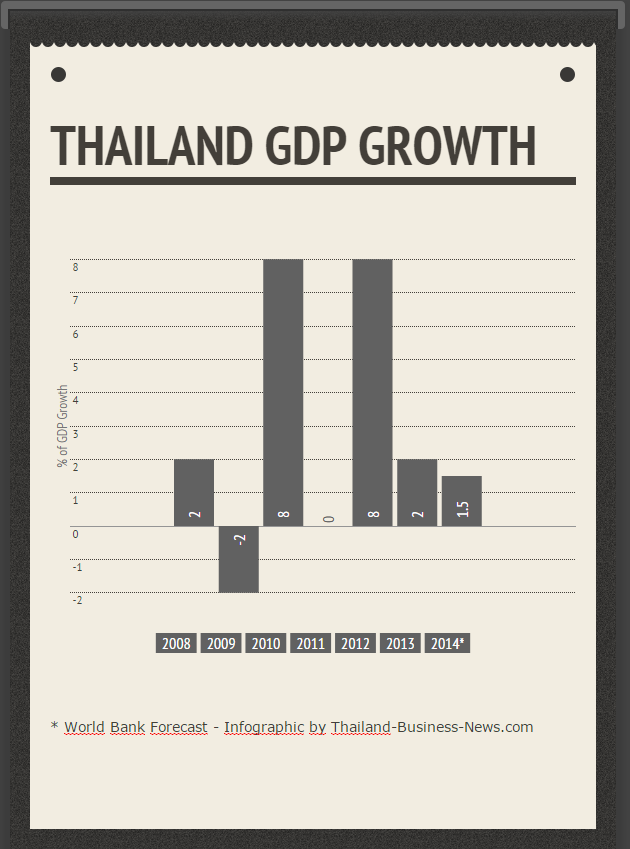 With General Prayuth Chan-ocha being elected as Interim Prime Minister, the junta has gained full control of governance. Huge power amassed by the Junta could be left unchecked, risking a further deepening of the political divide.

Thailand Business Forecast.  While near-term stability bodes well for the economy, we maintain our downbeat outlook on Thai politics.

While Thailand’s economy has rebounded in Q214, we believe it has yet to turn the corner, as domestic demand has remained soft. That said, ongoing efforts by the junta to revive the economy will likely gain momentum. We are forecasting real GDP growth of 2.0% in 2014 and 4.1% in 2015. Policy uncertainty under military rule and high household debt remain salient risks in our view.

We expect Thailand’s budget to be ready at the start of FY2014/15, which will be a positive for the economy.

The junta has exercised fiscal restraint while planning for the budget, and we believe that this will likely keep the country on a sustainable fiscal trajectory in 2015. That said, should the junta pursue populist measures in a bid to stay in power, this will pose downside risks to our forecasts.

We believe that the Bank of Thailand (BoT) will maintain its growth bias, and are projecting the central bank to hold its benchmark repurchase rate steady at 2.00% for the remainder of 2014. That said, an economic rebound over the coming quarters will likely see the BoT start to normalise its benchmark rate in 2015. We therefore expect a total of 50 basis points (bps) worth of rate hikes in 2015.

Recent political and social stability in Thailand, coupled with a likely growth rebound over the coming quarters, should provide considerable support for the currency. We hold a neutral outlook for the Thai baht, and are forecasting for the unit to average THB32.50/USD in 2014, followed by a mild appreciation to THB31.75/USD in 2015.

A recent World Bank Group report finds that Thailand further improved its business environment over the past year. The country continues to rank among the top 30 economies worldwide and second among emerging economies of East Asia on the ease of doing business.

“Through its public service improvement program over the past 10 years, Thailand has implemented reforms to improve the ease of doing business. This has benefited local entrepreneurs, who now have fewer regulatory hurdles to deal with and more resources to focus on their business,” said Ulrich Zachau, Country Director for Thailand, World Bank Group.

“Thailand has also used technology to improve the regulatory environment for businesses. For example, the use of electronic systems has reduced both the number of documents and the time needed for exporting and importing by almost half since 2007.”

Doing Business 2015: Going Beyond Efficiency introduces a number of methodological refinements in the annual report series. To better capture the quality of regulations, the report expands the data for three of the 10 topics covered. In addition, the ease of doing business ranking is now based on the distance to frontier score. This measure shows how close each economy is to global best practices in business regulation. A higher score indicates a more efficient business environment and stronger legal institutions. Finally, Doing Business now collects data for a second city in the 11 economies with a population of more than 100 million.

With these changes in methodology taken into account, Thailand’s standing in the ease of doing business ranking improved from 28th in last year’s Doing Business report to 26th in this year’s report. The report finds that Thailand ranks among the top 30 economies in the world in five areas: dealing with construction permits (at 6th in the global ranking), getting electricity (12th), protecting minority investors (25th), enforcing contracts (25th), and registering property (28th). And the report recognizes that in 2013/14, Thailand made dealing with construction permits less time-consuming by introducing a fast-track approval process for building permits for smaller buildings.