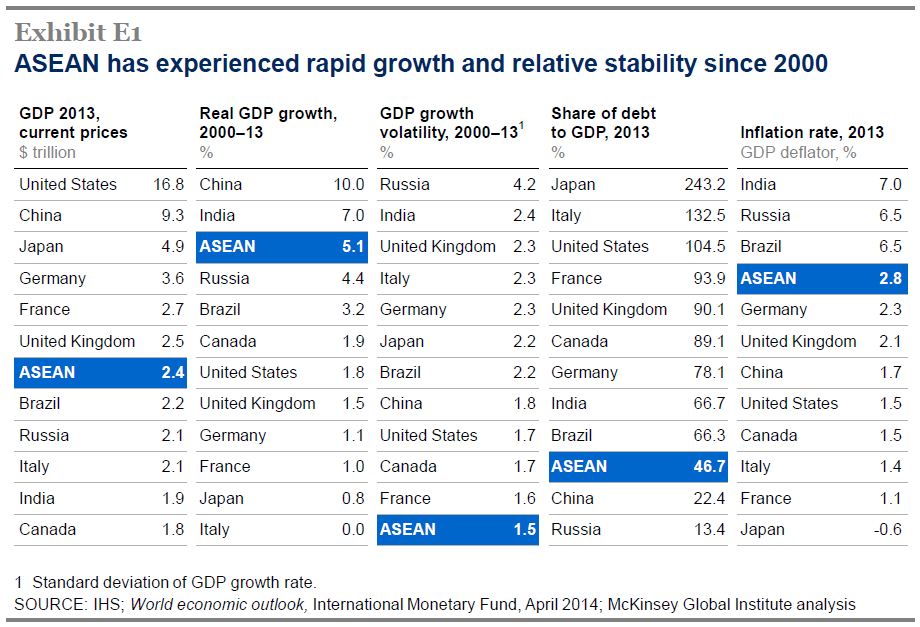 The Association of Southeast Asian Nations (ASEAN) encompasses ten countries with a multitude of ethnicities and languages, as well as wide economic disparities.

But these nations—Brunei, Cambodia, Indonesia, Laos, Malaysia, Myanmar, the Philippines, Singapore, Thailand, and Vietnam—are not only tied together by multiple threads of history and culture but also increasingly linked by business networks, trade relationships, migration, and shared resources.

Today, almost five decades after ASEAN’s founding, it is pursuing a more ambitious form of economic integration as a tool for achieving broader prosperity and greater global competiveness.

The region has enjoyed remarkable economic progress in recent years; millions have been lifted out of poverty. Viewed as a single entity, ASEAN would rank as the world’s seventh-largest economy.

But much of its recent growth has been generated by an expanding labor force and the shift of workers from agriculture to manufacturing. These factors will eventually fade, so there is new urgency for confronting the region’s low levels of productivity.

To sustain economic growth, many member states will need to more than double their historical rates of productivity improvement.

A new report from the McKinsey Global Institute, Southeast Asia at the crossroads: Three paths to prosperity, finds that the region can address its productivity challenges and find new catalysts for growth by pursuing the opportunities associated with three global megatrends:

The booming cities of Southeast Asia account for more than 65 percent of the region’s GDP today, and more than 90 million people are expected to move to urban areas by 2030.2 This shift will support the continued growth of the consuming class, which could double, to 263 million households, by 2030. That would make ASEAN a pivotal market of the future for companies in a range of industries.

Keeping pace with this growth and creating cities with a high quality of life will demand some $7 trillion of investments in infrastructure, housing, and commercial space. By 2030, the continued growth of cities could have an annual economic impact of some $520 billion to $930 billion.