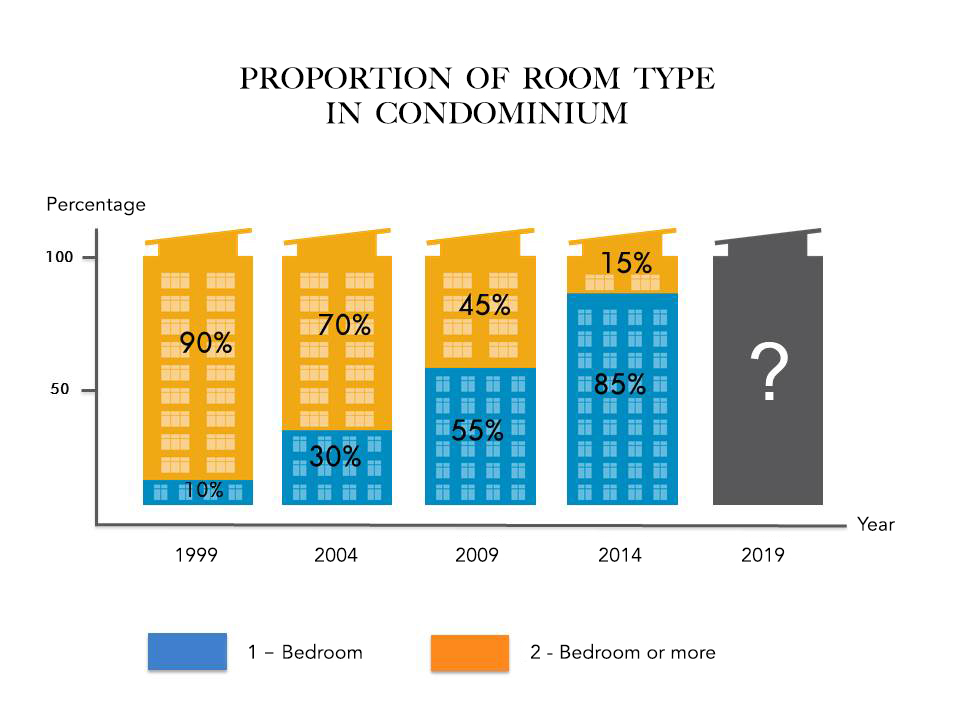 According to Thailand’s property and facility management agency Plus Property, condominium market survey, the data indicates that during the time of the Tom Yum Kung crisis, condominium projects were primarily constructed in response to actual demand for residential use.


Two-bedroom and larger units rose to popularity in the pre-crisis years, before widespread development of public transit systems led to higher demand for studio and one-bedroom units.

However, Plus’ own unit resale data shows that two-bedroom units have increased in share, from 22% last year to 25%, signifying a behavioural shift among consumers that may lead developers to offer more two-bedroom units with an initial focus on the high-end segment.

Mr. Poomipak Julmanichoti, Managing Director of Plus Property Company Limited, revealed that condominiums had become a major part of life in Bangkok over the past ten years due to the greater convenience offered by modern public transit systems, like the BTS Skytrain. Condominium unit prices vary inversely with their distance from city centre areas and directly with unit size – the larger the unit and the closer it is to downtown zones, the higher the price.

“In the period just before and after the Tom Yum Kung crisis, condominium projects were constructed in response to actual residential demand. Most were either two-bedroom units or larger. The opening of the BTS Skytrain in 1999 coincided with an economic revival.

Projects suspended during the crisis resumed construction and saw it through to completion. Once the Skytrain system achieved widespread popularity in 2004, more condominium projects began development along Skytrain routes. These projects were designed to fit the more frenetic urban lifestyle.

Demand for two-bedroom units is rising.

With consumers primarily seeking new homes in the vicinity of their workplaces for commuting convenience, developers began to focus more on one-bedroom unit types. The trend persisted throughout 2009 as condominium living became increasingly popular. With younger generations showing a tendency to prefer living alone in exchange for greater convenience, studio units also grew in prominence alongside one-bedroom condominiums.

Development in 2014 is now focused on one-bedroom units of ever-smaller sizes, which are more affordable for middle-class buyers.

Investment in one-bedroom units is also on the rise due to the ease of finding new tenants, especially as expats are spending significantly less on residential rentals compared to before the Tom Yum Kung crisis. Today, Japanese expats represent the largest group of foreign condominium tenants, with their budgets generally more suited to one-bedroom rather than two-bedroom units – hence the very small amount of two-bedroom units found in new projects.”

However, demand for two-bedroom units is also rising.

Many consumers who invested in one-bedroom units five to ten years ago now have extended families, and hence require more residential space. Demand for larger units can be expected to increase throughout the next five years, as new developments today are still focused on studio and one-bedroom units.

Projects located on Bangkok’s fringes also reflect the trend of growing demand for two-bedroom units. Plus Property’s resale data correlates with this finding, showing an increase in the resale share of two-bedroom units, from 22% last year to 25% today.

While China’s biggest corporates are increasingly flexing their global muscle as the country’s economic and geopolitical influence accelerates, Bangkok is the 10th most popular destination for mainland firms expanding overseas. END_OF_DOCUMENT_TOKEN_TO_BE_REPLACED

With its strategic location in the center of ASEAN with emerging markets, including Cambodia, Laos, Myanmar, Malaysia and southern China, on its border, Thailand is well position to connect investors to new opportunities arising from the increasing border trade and the region’s rapid economic growth.
END_OF_DOCUMENT_TOKEN_TO_BE_REPLACED

Twenty years ago, day trading was the great new pastime for Americans, all of them tuned to the financial news and reports on the day’s newest crop of IPOs. END_OF_DOCUMENT_TOKEN_TO_BE_REPLACED