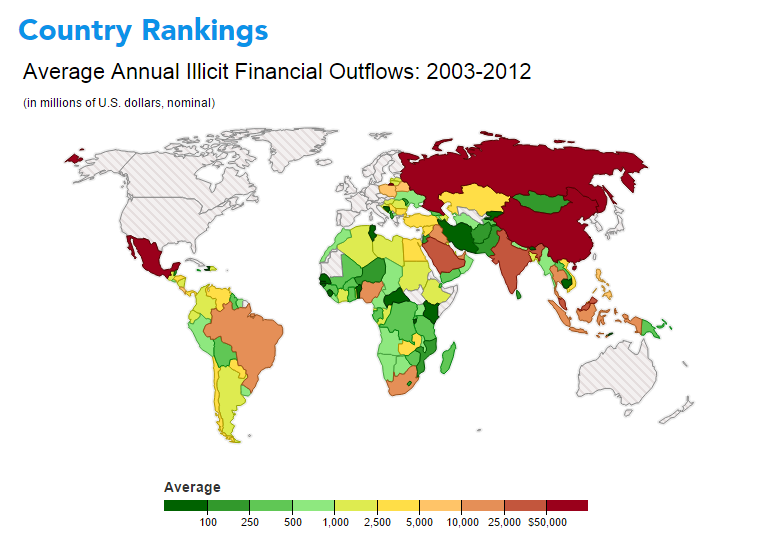 More than $35 billion was illicitly drained from Thailand through money laundering, tax evasion, crime and false trade documentation in 2012, according to Global Financial Integrity latest report.

2012 is marking the fourth-consecutive annual increase in corruption-tainted outflows, a US think tank said. Washington-based group Global Financial Integrity said. Thailand moved up to eighth on the list of developing countries with the most illegal capital outflows in the decade through 2012.

Only Indonesia, ranking seventh, Malaysia, at fifth, and China, in first, were more corrupt in Asia. However, unlike Indonesia and, particularly, Malaysia, Thailand has been backsliding on fighting corruption related to its international trade.

The report finds that from 2003 to 2012, developing countries lost US$6.6 trillion to illicit outflows. The outflows increased at an average inflation-adjusted rate of 9.4% per year over the decade—significantly outpacing GDP growth.

As a percentage of GDP, Sub-Saharan Africa suffered the biggest loss of illicit capital. Illicit outflows from the region averaged 5.5% of GDP annually. Globally, illicit financial outflows averaged 3.9% of GDP.

The National Anti-Corruption Commission (NACC) is completing a probe into a case involving alleged corruption by Yingluck and former senior officials at the Commerce Ministry. The attorney-general would then be expected to process the two cases within a month before they could be passed to the Supreme Court.

“[The former prime minister] continued the rice-pledging scheme and incurred more losses for the state, even though [she] had the authority to stop or end it,” said the head of the investigation, Vicha Mahakun,announcing the decision.

The rice deal with China that never existed

The case against Yingluck’s handling of the paddy pledging-scheme is an allegedly fraudulent government-to-government contract for five million tons of rice signed with China in 2012.

The Guangzhou-based company executing the deal, GSSG Import and Export Corporation, was represented by Rathanit Sojirakul, an aide to Pheu Thai MP Rapeephan Phongruangrong, the wife of pro-Shinawatra “Red Shirt” leader Arisman Phongruangrong. China later pulled out on account of the corruption probe that followed, and the NACC has since tried but failed to contact GSSG to confirm the deal ever existed, according to an article published by The Diplomat.

“Normally, if it’s a government-to-government deal the money must come from China as a letter of credit, but there was no letter of credit just a check cashed in Thailand,” said Warong Dechgitvigrom, the Democrat Party MP who compiled evidence against the rice scheme.

China leads the world over the 10-year period with US$1.25 trillion in illicit outflows, followed by Russia, Mexico, India, and Malaysia. China also had the largest illicit outflows of any country in 2012, amounting to a massive of US$249.57 billion in just that one year.

While China’s biggest corporates are increasingly flexing their global muscle as the country’s economic and geopolitical influence accelerates, Bangkok is the 10th most popular destination for mainland firms expanding overseas. END_OF_DOCUMENT_TOKEN_TO_BE_REPLACED

With its strategic location in the center of ASEAN with emerging markets, including Cambodia, Laos, Myanmar, Malaysia and southern China, on its border, Thailand is well position to connect investors to new opportunities arising from the increasing border trade and the region’s rapid economic growth.
END_OF_DOCUMENT_TOKEN_TO_BE_REPLACED