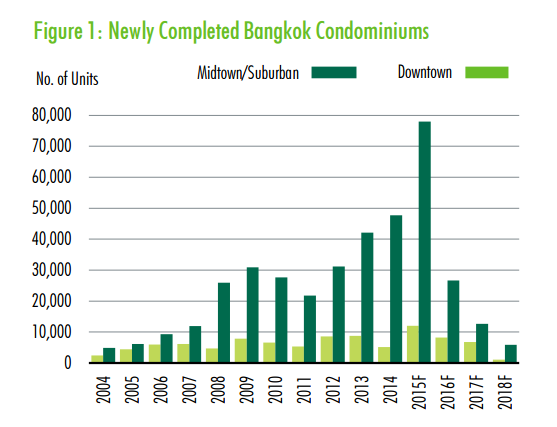 According to CBRE Thailand latest Bangkok Overall MarketView Q4 2014, record-breaking prices of over THB 300,000 per sq.m. have been achieved in five downtown condominium projects in 2014.

This reinforced our belief that the downtown condominium sector is a low-volume high-value market with limited new supply.

The number of condominium units launched increased by 281% Q-o-Q in the downtown area and 13% Q-o-Q in the midtown/suburban area.

Due to political turmoil in the first half of the year, the total number of condominiums launched throughout 2014 decreased by 37% in the downtown market and 29% in the midtown/suburban market, compared to 2013.

The hot spot for midtown/suburban condominium launches in 2014 was along the MRT’s Purple Line. Throughout the year, 7,500 units were launched in this area, accounting for 58% of newly launched units along under-construction mass transit lines.

This has pushed developers to search for new locations along other under-construction mass transit lines where there is less competition.

Still, the key issues in the midtown/suburban market are how many speculative condominium buyers will default if they cannot resell before completion and how many end-user buyers will be able to get mortgage loans with tightened banks’ criteria.

While China’s biggest corporates are increasingly flexing their global muscle as the country’s economic and geopolitical influence accelerates, Bangkok is the 10th most popular destination for mainland firms expanding overseas. END_OF_DOCUMENT_TOKEN_TO_BE_REPLACED

With its strategic location in the center of ASEAN with emerging markets, including Cambodia, Laos, Myanmar, Malaysia and southern China, on its border, Thailand is well position to connect investors to new opportunities arising from the increasing border trade and the region’s rapid economic growth.
END_OF_DOCUMENT_TOKEN_TO_BE_REPLACED