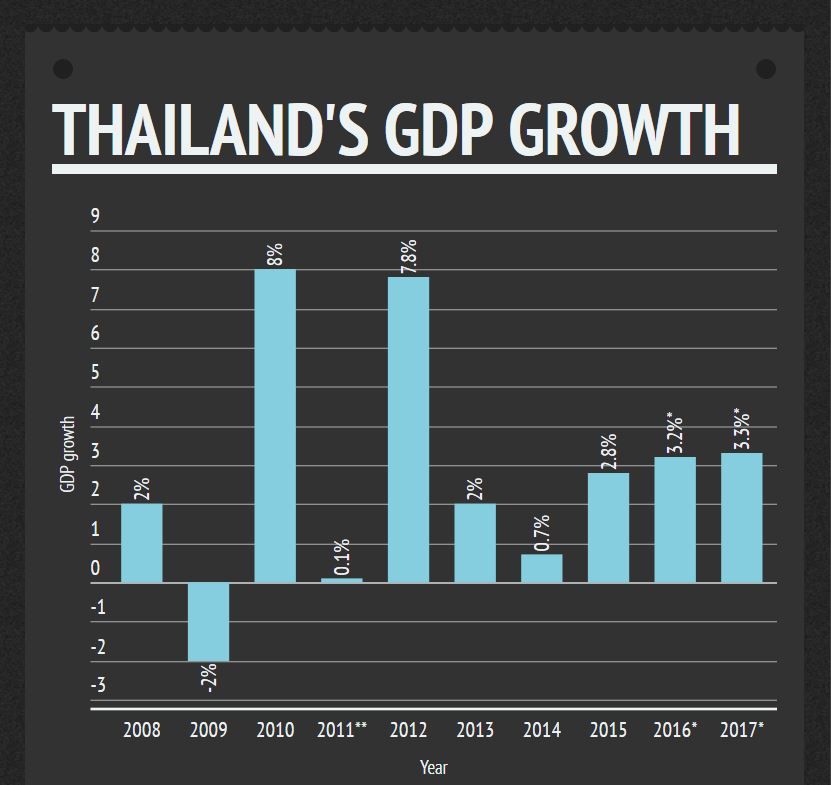 The recovery of household purchasing power will help to shore up economic growth this year to achieve the 3.2% growth target, National News Bureau of Thailand (NNT) said.

NNT said Krungsri Bank’s chief economist Somprawin Manprasert stated that the purchasing power of Thai households is rebounding in all regions of the country, recording an increase of about 8,000-12,000 baht per household.

Supporting factors include the expanding revenue from tourism, improving agricultural prices and the reduction of debts incurred by the previous government’s first-car program.

Recent crackdown on zero-dollar package tour might reduce the number of Chinese visiting Thailand by about 300,000, but spendings by visitors will not be much affected.

Combined with the government’s acceleration of infrastructure investment and assistance of low-income earners, the bank expects the Thai economy to expand by 3.2 percent for 2016 and 3.3 percent for 2017.

The policy interest rate is likely to remain unchanged until the end of next year while the value of the Thai currency this year is estimated at 35.2 baht against the US dollar on average.

On the downside, Mr Somprawin said Thai exports have been struggling with sluggish recovery, with a contraction of 2 percent forecast for the entire year.

Kasikorn Research Centre predicted that the economic growth rate for the whole year would register at 3.3 percent instead of 3 percent as earlier forecast.

She attributed the improved growth rate to several positive factors such as private sector’s consumption, stimulus packages from the government, increased revenue of farmers, government investments in new infrastructure projects such as the Pink Line and the Yellow Line who biddings are expected to be opened in the fourth quarter and the dual-track train project from Prachuab Khiri Khan to Chumporn.

Exports also improved with the contraction rate at 1.8 percent instead of 2 percent although investments from the private sector still expand slowly, said Mrs Pimolwan.