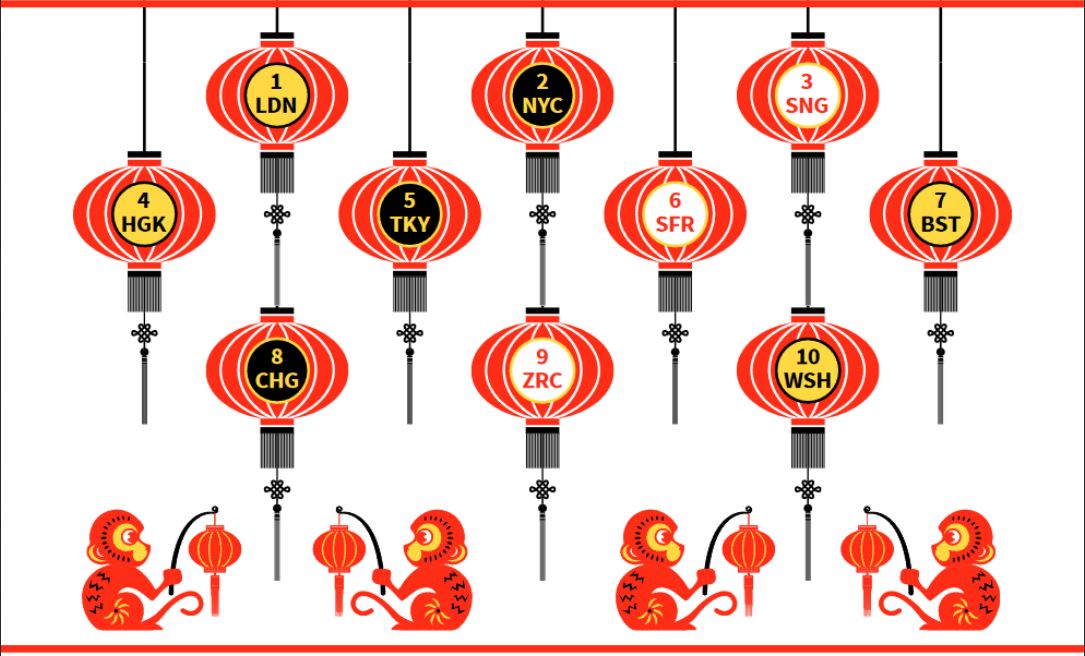 Hong Kong slipped to fourth place overall, while Singapore now only trails London and New York globally. Although the two financial centers are essentially neck and neck – Singapore scoring 755 points out of 1000 and Hong Kong 752 – the shift is indicative of a wider trend of optimism towards Singapore and uncertainty facing Hong Kong.

Although some reports identify an upsurge in Singapore’s attractiveness as a financial center and a decline in Hong Kong’s, both are leading destinations that are in many ways complementary to each other.

When entering Asia, consideration of taxation, market access, international linkages, labor costs, industry focus, and other factors must be made to develop an optimal entry strategy suited to particular investor goals and priorities.

Both Singapore and Hong Kong feature a low tax environment with strong IP protection, contract enforcement, and dispute resolution, and promote fast and accessible business establishment procedures. As both were once British colonies, their legal systems are familiar and effective for Western investors.

While “ease of doing business” is often seen as a euphemism for limited government activity and intervention, in reality effective regulations and government promotions contribute to the countries’ high standings.

Although Singapore and Hong Kong are comparable in many areas, each has their own strengths and weaknesses. As a multilingual state using English as its lingua franca to go along with strong Mandarin, Singapore holds a clear communication advantages over Hong Kong, where the primary language is Cantonese.

According to a study conducted by Dell, Singapore is the world’s third most innovative and future-ready economy due to its ability to facilitate people and organizations to drive change, provide quality infrastructure, and promote innovation, growth, and profitability.

In contrast, Hong Kong ranked 25th in this survey. Similarly, Singapore’s reign on top of the World Bank’s ease of doing business index spanning over a decade is demonstrative of the city state’s inviting environment for forming and operating businesses.

While Singapore leads in many indicators relating to infrastructure, human capital, and business environment, Hong Kong excels in pure financial services and scale.

Although Singapore leads in innovation, Hong Kong has a greater capacity to leverage new listings and is particularly strong in equities and IPOs. While Singapore is known for its business-friendly environment, Hong Kong is similarly competitive in this regard, and surpasses its South East Asian rival in some aspects. For example, Singaporean companies must have at least one director who is a resident of Singapore, whereas in Hong Kong there is no such restriction.

With conditions reinforcing efficient business operations and robust financial services, Singapore and Hong Kong are globally competitive as financial centers on their own merits. However, what makes them particularly unique is their potential to be used as entry points for foreign investors to access neighboring regions, namely due to Singapore’s ASEAN membership and Hong Kong’s status as a Special Administrative Region of China.

Hong Kong has long been used as a platform to access the more restrictive and opaque Chinese mainland, enjoying many unique advantages not found elsewhere. The exclusive relationship allows foreign investors to more easily set up a wholly foreign-owned enterprise (WFOE), access offshore RMB exchange, and cheaply transfer money abroad, among other benefits. Given China’s status as the world’s second largest economy, there are more business opportunities in Hong Kong than in Singapore, and mergers and acquisitions are increasingly China-focused.

Although Hong Kong continues to enjoy preferential policies when dealing with China, there are signals that these advantages will lessen long term.

Mainland China is gradually liberalizing and developing a fully market-based economy, while simultaneously increasing its interference in Hong Kong’s domestic political process. Taken together, Hong Kong appears to be slowly losing its unique status within China.

For example, Hong Kong’s share of South China’s cargo business declined from over 70 percent in 2001 to less than 40 percent in 2015, as ports such as Shenzhen are increasingly liberalizing their policies towards foreign companies and building modern infrastructure. Similarly, movements towards full convertibility of the RMB further reduce Hong Kong’s competitive advantages.

In addition to losing preferential policies, Hong Kong is facing rising instability and encroachments from the Chinese government. In 2014, hundreds of thousands gathered for the months-long “Occupy Central” protests, advocating for greater democratization and independence from Beijing’s meddling. Incidents such as the apparent abduction of anti-government booksellers and a Chinese whitepaper directing Hong Kong judges to be “patriotic” raise concerns over the region’s neutrality.

NGOs such as Freedom House confirm these fears, recording a multi-year trend of declining freedoms and civil liberties, though the region remains far freer than Singapore according to most indicators. However, Singapore arguably offers greater stability and predictability going forward.

As a member of ASEAN, Singapore benefits from preferential policies when investing and conducting business in the territory of the other nine member states.

With rapid growth in several ASEAN countries, affordable labor, improving infrastructure, and a growing consumer class, the long term prospects for the region are promising. As China’s labor costs rise and its growth slows, ASEAN states such as Vietnam are increasingly seen as effective low cost alternatives for foreign investment.

However, the levels of development of ASEAN members vary widely. Less developed members such as Laos and Myanmar offer potential as emerging markets but are plagued by unpredictable governments, and even relatively developed members like Thailand continue to experience significant political volatility. Singapore singularly stands out amongst its ASEAN peers with its exceptional stability and transparent business climate.

The city state also has preferential trading arrangements in place with 61 countries, compared to just six for Hong Kong. Further, the nation has a close relationship with India owing to its considerable population hailing from the subcontinent. Singapore’s stable, international, and low tax environment make it an attractive and increasingly important option for foreign investors looking to explore the tantalizing but sometimes intimidating region of ASEAN.

ASEAN is 50 and here’s why you should care