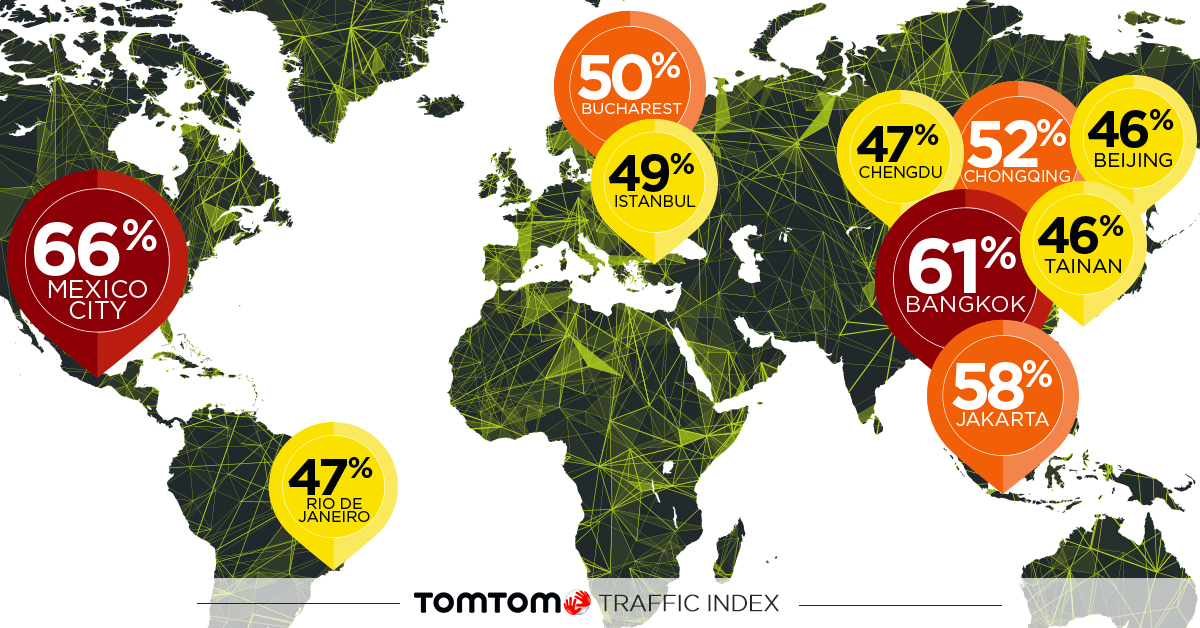 TomTom (TOM2) today released the results of the TomTom Traffic Index 2017, the annual report detailing the cities around the world with the most traffic congestion.

Mexico City once again takes the top spot with drivers in the Mexican capital expecting to spend an average of 66% extra travel time stuck in traffic anytime of the day (7% percentage points up on last year), and up to 101% in the evening peak periods versus a free flow, or uncongested, situation – adding up to 227** hours of extra travel time per year.

Using data from 2016, the TomTom Traffic Index looks at the traffic congestion situation in 390 cities in 48 countries on six continents – from Rome to Rio, Singapore to San Francisco. TomTom works with nearly 19 trillion data points that have been accumulated over nine years. This is the sixth year of the TomTom Traffic Index.

Looking at TomTom’s historical data, traffic congestion is up by 23% globally since 2008. But, interestingly, there are shocking differences between continents.

“TomTom’s mission is to transform mobility across the world, helping to create the smarter cities of the future. A big part of this transformation is to help everyday drivers to make better decisions about how they get around.

This is where our expertise in traffic comes in, and it’s why we release the TomTom Traffic Index every year. It’s designed to help drivers, cities and transport planners to understand traffic congestion and, most importantly, how to reduce it.”

People can find out more about the TomTom Traffic Index, and discover where their home city ranks at www.tomtom.com/trafficindex. There’s also helpful advice on beating traffic congestion. For the first time, this year, TomTom is celebrating those cities that deserve special recognition for their efforts to beat traffic congestion with the introduction of the TomTom Traffic Index awards.

Six cities have been chosen for special recognition by an international panel of traffic experts. Each expert nominated three cities and subsequently all experts voted to determine the award winning cities from the nominated cities. Winners include Moscow, Stockholm and Rio de Janeiro. The full list of winners can be found here: www.tomtom.com/trafficindex/awards.

Ranking of the most congested cities in Europe in 2016 (Overall daily congestion level – extra travel time – population over 800,000):

Ranking of the most congested cities in North America in 2016 (Overall daily congestion level – extra travel time – population over 800,000):

90% of Internet Users in Thailand Use Smartphones