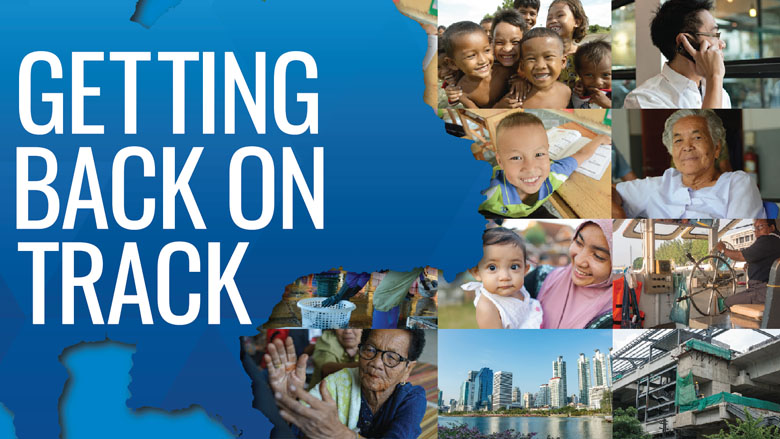 A new World Bank report explores how Thailand can restart its economic engine in ways that benefit all people in the country and help protect the environment.

The report, “Getting Back on Track: Reviving Growth and Securing Prosperity for All,” is the first Systematic Country Diagnostic for Thailand, an assessment of the most pressing challenges and opportunities in ending poverty and boosting shared prosperity.

For more than a quarter century prior to the 1997 Asian financial crisis, Thailand’s economy grew at an average annual rate of 7.5 percent, creating millions of jobs that helped pull millions of people out of poverty.

“The report identifies policies that will create more opportunities for more Thais to earn and live productive lives, give children from poor families a chance to grow into a life of prosperity, and develop a smart social protection system to support vulnerable people when they get old, fall sick, or lose their jobs.”

An estimated 7 million Thai people were poor in 2014

Over the past few decades, Thailand has made tremendous development progress. Still, an estimated 7 million Thai people were poor and an additional 6.7 million were at risk of falling into poverty in 2014. Inequality also remains a major challenge.

From 1960 to 1996, Thailand maintained a growth rate of 7.5 percent. But growth slowed to an average of 3.3 percent from 2005 to 2015. People’s lives continue improving but slowly – more slowly than in neighboring countries or the Association of Southeast Asian Nations (ASEAN) as a whole.

A decade ago, Thailand ranked above other Southeast Asian and upper-middle-income countries on all dimensions measured in the World Economic Forum’s Global Competitiveness Index. Today, other nations have caught up, the World Bank report said.

A major reason for the recent slowdown in growth is its loss in global competitiveness over other ASEAN countries.

Second, the quality of the bureaucracy has worsened, while it has improved in neighboring countries. The “shock absorber” against political shocks is no longer as effective as it was.

The quality of the bureaucracy has worsened in Thailand, while it has improved in neighboring countries

Based on competitiveness scores between 2006/07 and 2016/17, compiled by the World Economic Forum, ASEAN countries like Malaysia and Vietnam have edged out Thailand on many areas — innovation, infrastructure, business environment, higher education, and training.

“The analyses and literature used in this study were complemented by an extensive nationwide engagement with government and various stakeholder groups in the country, including development partners, private sector, academia, and civil society.”

Ten years ago, Thailand looked strong and healthy on all the dimensions tracked by the World Economic Forum.

Over the past decade, mega projects that could have relieved infrastructure constraints and made Thailand the hub of ASEAN did not get off the ground.

Oil prices pushed Thai exports up to 8.8% in January