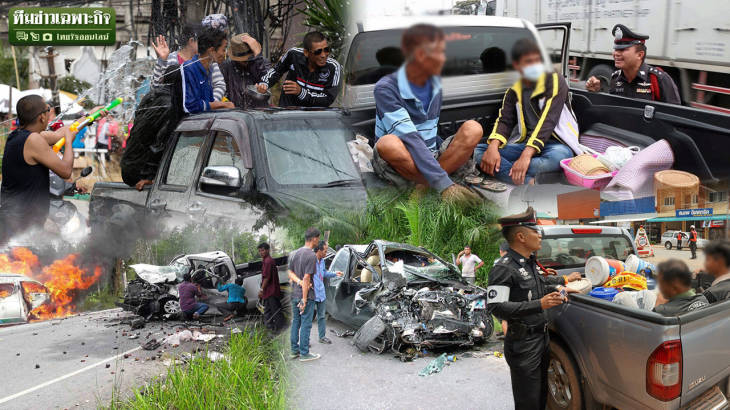 For many years, Thailand has earned notoriety in the area of road fatalities. High death tolls, mostly resulting from reckless driving, have prompted the state and its partners to invest enormously in road safety campaigns, with less-than-impressive results, however.

The World Health Organisation in its Global Road Safety Report in 2015 ranked Thailand as having the second most deadly roads in the world. To put this into perspective, for every 100,000 people in Thailand, about 36 die in road crashes a year.

Road fatalities soar during the festive seasons, the New Year and Songkran traditional New Year, when many Thais travel upcountry.

Despite intensive road safety campaigns, this year’s death tolls were still high, 478 during New Year, compared to 390 during Songkran. The number of road crashes was nearly 4,000 in both festivals.

Road crashes not only affect accident victims, but they also contribute to immeasurable losses for the Thai economy.

On top of that, they also incur other indirect costs such as administrative expenses, public property damage, traffic congestion, and so on.

Thailand’s integrated traffic accident statistics, in accordance with databases developed during 2011-2013 by the Ministry of Public Health, the Royal Thai Police, and Road Accident Victims Protection Company, show that about 22,000 people die on Thai roads every year, while the traffic-related severe injuries toll is 108,000 a year. These numbers unequivocally add up to over half a trillion baht of economic loss.

The Thailand Development Research Institute (TDRI) conducted research on road safety, focusing on the losses from traffic deaths and injuries, in Saraburi from May last year to this month. We employed the “Willingness to Pay” approach in the research, “Road Safety Measure Assessment Project: The case of Tha Luang and Kaeng Koi”.

More specifically, the research team surveyed how much locals were willing to pay to reduce road casualties in the areas and used the answers to calculate the value of lives.

According to the study, the value of deaths and severe injuries equalled 10 million baht and 3 million baht, respectively.

The research team uses these numbers to estimate a total economic loss for the whole country since Saraburi can represent the country’s semi-urban areas.

The research team found that Thailand wasted approximately 545 billion baht a year during 2011-2013, accounting for 6% of the country’s annual GDP.

Interestingly, the team further found that despite the high risk of traffic fatalities, many Thais attach little importance to road casualties.

The research mentioned above shows that 27% of the survey respondents do not perceive road accident risks as an issue of concern. Another 38% of respondents also say they only regarded the problem as of moderate importance. Also, 2% of the respondents were not willing to pay anything to reduce the risk of road casualties in a hypothetical situation.

The lack of awareness of road safety problems leads to dangerous driving behaviour. With that matter, raising awareness can mitigate the issue.

US academic Sam Peltzman looked into behavioural economics and road safety and found that people tend to flirt with risk when they feel safe. Therefore, the more people are aware of traffic accident risks, the more carefully and responsibly they drive.

Natcha O-charoen is a researcher at Thailand Development Research Institute (TDRI). Policy analyses from the TDRI appear in the Bangkok Post on alternate Wednesdays.