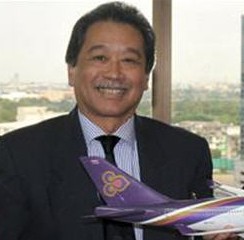 The resignation is to show responsibility, an act which is seen as an appropriate norm for the company .The information regarding Mr Wallop’s case will be useful for laying out regulations to prevent such an incident occurring in the future, said Mr Ampon.

A fact finding set up to investigate the case will conclude its probe on Monday. Investigation results will reveal the damage caused by the excess luggage matter and also the identities of other employees who were involved in the case. The company will call for compensation for damages, he said.

Mr Ampon said Mr Wallop conceded that a person who accompanied him, used his name to load more luggage, although he said it was not for commercial purposes.

Mr Wallop was alleged to have avoided paying charges for carrying some 390kg of excess baggage on a flight from Tokyo to Bangkok last month. The revelation came at an especially sensitive time as Thailand’s national airline is restructuring after a huge net loss of more than Bt20 billion in 2008. (TNA)