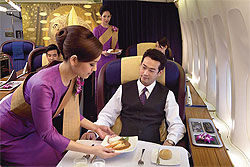 Passengers of Thai Airways International (THAI) can expect to be served by younger female flight attendants as senior staff take up an unprecedented voluntary resignation package.

THAI is aiming to improve its appeal to customers while circumventing accusations of age and sex discrimination with a tempting ‘‘mutual separation plan’’ for female flight attendants aged 45 and over. Those who take up the carrier’s offer will receive up to 30 times their monthly salary in a lump sum.

The scheme is the first so-called “mutual separation plan” – or MSP – to be launched by THAI in its 50-year history and exclusively targets female flight attendants aged 45 and over.

The initiative, which has been backed by the airline&apos;s union, is part of the management&apos;s bid to rejuvenate THAI&apos;s brand image and save costs, while giving senior crew the chance to stay on or leave the firm, said THAI executives.

To avoid allegations of sex and age discrimination, THAI plans to make voluntary retirement highly appealing, with flight attendants who have served for 15 years being offered a lump-sum of up to 30 times their monthly salary.

THAI is believed to be among very few leading carriers in Asia in having very liberal employment terms for female cabin attendants, with no fixed period of service or age limit beyond the compulsory retirement age of 60.

The Thai carrier had originally followed the norms of the worldwide airline industry, hiring cabin attendants on contract terms and setting the age limit for operating on flights at 45. But union and political pressure in the 1990s, while Montree Pongpanit served as transport minister, succeeded in removing restrictions, enabling attendants to work on board until 60, provided they were willing and physically fit enough.

via THAI seeking a younger image.

While China’s biggest corporates are increasingly flexing their global muscle as the country’s economic and geopolitical influence accelerates, Bangkok is the 10th most popular destination for mainland firms expanding overseas. END_OF_DOCUMENT_TOKEN_TO_BE_REPLACED

With its strategic location in the center of ASEAN with emerging markets, including Cambodia, Laos, Myanmar, Malaysia and southern China, on its border, Thailand is well position to connect investors to new opportunities arising from the increasing border trade and the region’s rapid economic growth.
END_OF_DOCUMENT_TOKEN_TO_BE_REPLACED

Twenty years ago, day trading was the great new pastime for Americans, all of them tuned to the financial news and reports on the day’s newest crop of IPOs. END_OF_DOCUMENT_TOKEN_TO_BE_REPLACED