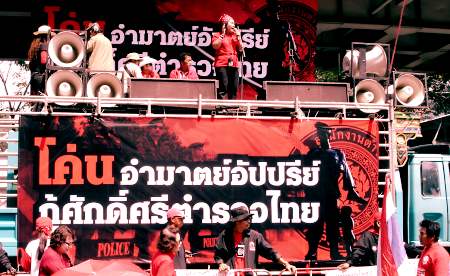 
Political unrest and the shutdown of the two airports in Bangkok in late November severely affected tourism and consumer confidence in Thailand. Real GDP is projected to contract by 2.7 percent in 2009, as the global outlook remains negative and external demand continues to contract. The fiscal stimulus and monetary expansion implemented by the authorities are likely to partially mitigate the impact of the slowdown, allowing growth to resume in the fourth quarter of 2009 assuming a better outlook for the global economy in 2010.

Private investment in Thailand has been subdued in the past three years due to uncertainty about the political situation.
In 2006-2008 investment grew by an average of 2.7 percent a year (compared with real GDP growth of 4.3 percent on average), down from 14.8 percent during 2003-2005. This earlier retrenchment of investment has dampened the impact of the financial crisis, most notably on foreign direct investment (FDI). While little new FDI is expected, there has been no rush to exit from foreign investors. Growth of private investment in 2008 came mainly from Thai investors, as gross FDI inflows declined from 2007 levels. Private investment is expected to contract 5 percent in 2009 as capacity utilization remains low (around 50 percent). However, growth could resume in the fourth quarter on the back of increased public investment. Public investment has been sluggish in Thailand since the 1998 crisis, but is expected to increase in 2009 given increased political stability and the political imperative to respond to the slowdown in the export sector. The share of public investment in real GDP averaged only 5.7 percent during 2004-2008 compared more than 10 percent before the 1998 crisis. In 2008, public investment contracted by nearly 5 percent as a result of political uncertainties, which delayed investment decisions. Public investment is projected to grow at 7 percent in 2009 as the implementation of large infrastructure projects step up.

The fiscal stimulus and monetary expansion implemented by the authorities are likely to partially mitigate the impact of the slowdown, allowing growth to resume in the fourth quarter of 2009 assuming a better outlook for the global economy in 2010.

Fiscal policy has become expansionary to mitigate the impacts of the crisis.
External debt service ratios are manageable at 5.4 percent of Thailand’s exports overall. Total external debt was under 60 percent of international reserves at the end of 2008. The Thai financial sector is basically sound and has been largely insulated from the immediate impact of the global financial crisis, but increasing pressure from the slowdown on companies will be passed to banks.

The average capital adequacy ratio amounted to about 14 percent at end-2008. Net NPLs declined during 2008 to 2.9 percent of total assets. While this trend is set to reverse during 2009, banks appear to have enough room, at least in the short-term, to cope with higher NPLs. There is adequate liquidity in the domestic banking system, but banks have become more cautious given that credit quality is expected to deteriorate. Credit expanded by 9 percent in 2008, initially due to higher demand for working capital, then as a consequence of large domestic firms switching from foreign to domestic borrowing.