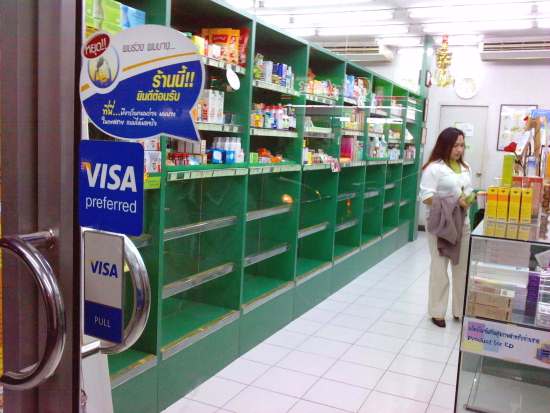 Hospitals warn of possible drug shortages as prolonged flooding in Thailand has disrupted local production and delivery of medical supplies.

“Hospitals are panicking now, though they are not necessarily running out of supplies,” Pongpan Wongmanee, deputy secretary-general of the government’s Food and Drug Administration (FDA) told IRIN, adding that most hospital stocks could last for at least a month.

Official predictions for how long it will take to drain waterlogged areas vary from 10 days to weeks.

Though flooding has disrupted the production of 393 registered medicines in more than 10 factories in Bangkok and neighbouring provinces, there is no report of drug shortages yet, according to the Health Ministry on 31 October.

But some hospital officials are concerned their supplies will dwindle quickly as operations at these pharmaceutical plants are suspended, and demand for scarce medicines is expected to increase.

“At this point, the biggest limitation is medication. There are lots of volunteers and nurses, but very little medication,” said Pranya Sakiyalak, assistant dean of public relations at Siriraj Hospital in Bangkok. The hospital is sending a mobile medical team daily to one of the most hard-hit provinces 70km north of the capital, Ayutthaya.

Most urgently needed are aspirin, antibiotics and saline solution as patients in flood-affected areas report common minor illness and injuries, he added.

Delivery of medicines is difficult as some main roads are inaccessible, forcing operators to use indirect routes for transportation, said Pongpan from the FDA.

As of 31 October, 73 highways in 15 provinces were unusable and 223 roads in 30 provinces impassable, says the government.

The Ministry of Public Health is proposing three options for stockpiling medicines to the government on 1 November, which includes recruiting new local drug manufacturers, importing drugs and speeding up the distribution of undelivered medicines still sitting in flooded factories.

Drug manufacturers hit by flooding were providing less than 10 percent of the country’s drugs, according to the FDA.

As of 26 October, the Health Ministry has begun coordinating drug imports from Malaysia and Japan.

Authorities are also looking for new ways to deliver drugs through the deluge, said Pongpan.

Thailand to Import Drug and Consumer Goods to Prevent Shortages