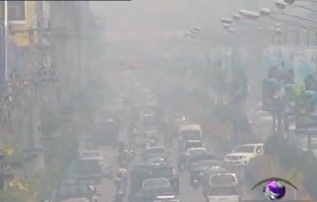 Chiang Mai Airport is under siege by haze and dust particles. The airport is using runway lights during daylight hours due to low visibility, and all roads in the provincial seat are experiencing visibility of less than 500 metres.

All roads in the provincial seat are experiencing visibility of less than 500 metres.

Local residents are wearing sunglasses and masks to prevent eye and nose irritation. According to the provincial disease control office, in the past five weeks, more than 240,000 people sought medical treatment for haze-related illnesses at 87 hospitals in eight northern provinces.

The official tally recorded over 100,000 patients with coronary heart disease, another 100,000 patients with respiratory diseases and about 20,000 persons suffering from eye inflammation and dermatitis. Meanwhile, the Meteorological Department warned of summer thunderstorms in the coming five days countrywide, first in the northeastern and eastern regions as a moderate high pressure system is forecast to extend into Thailand from tonight with northeasterly winds. Thunderstorms, thundershowers, gusty winds and hail are expected from Friday through Tuesday.

Thailand’s New social security system should include all hospitals