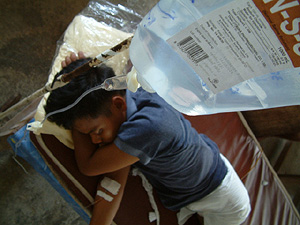 Resistance to an anti-malaria drug, artemisinin, is suspected along the Thailand-Myanmar border and in southern Vietnam, but scientists are hoping that it can be contained. Artemisinin resistance emerged on the Thailand-Cambodia border around eight years ago.

Resistance – the ability of the malaria parasite to survive drugs intended to kill it quickly – to chloroquine, an antimalarial previously widely used, forced treatment to change in the early 1970s and also originated in what is known as the Greater Mekong sub-region, which includes Cambodia, the southern provinces of China, Lao, Myanmar, Thailand and Viet Nam.

Chloroquine resistance spread to India and then to sub-Saharan Africa, which has the world’s highest burden of the disease.

Decades later, faced with another bout of resistance, officials are cautiously optimistic about preventing the spread of resistance to artemisinin.

“So far, we haven’t found any artemisinin resistance outside the Mekong region… I think we have good chances to keep it in the Mekong region,” Pascal Ringwald, coordinator of the global malaria programme for the World Health Organization (WHO), told a meeting of experts on antimalarial drug resistance in Bangkok.

He noted that the suspected cases of drug resistance along the two Thai borders appeared to be “totally independent, and it raises a concern that it could emerge anywhere.”

Resistance to artemisinin is not necessarily fatal for patients because partner drugs can boost its efficacy when it falters, but treatment may take longer and be more expensive.

Studies published earlier in April, covering more than 3,200 patients along the northwestern border of Thailand near Myanmar from 2001 to 2010, indicated a steady increase in drug resistance from 0.6 percent of surveyed patients to 20 percent after a decade.

Scientists are still searching for the exact causes of the resistance, but link it to the widespread use of monotherapies, in which only artemisinin is prescribed.

Despite an international resolution addressing the danger of monotherapies, 25 countries and 28 pharmaceutical companies continue to market them.

Other possible factors in resistance are parasite biology, human behaviour (like not taking the correct dosage or type of antimalaria drugs) and counterfeit drugs.