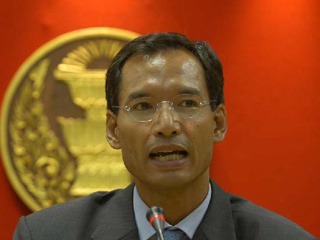 Thailand’s Finance Minister Korn Chatikavanij is leading a road show in Hong Kong during the weekend to help relieve investor concerns in reaction to current political and economic developments. Leaving Friday for the March 19-21 promotional event, Mr Korn traveled in a bid to explain to investors the current economic and political development in Thailand for better understanding.

Speaking before his departure, he said the mass rally by anti-government Red Shirt demonstrators during the past several days had not caused any anxieties among the public as the government remained able to control the situation.

Foreign investors are still confident in the government’s ability to  manage the rallies and prevent them from escalating, he said, adding that there is no reason for the government to dissolve the House of Representatives now.