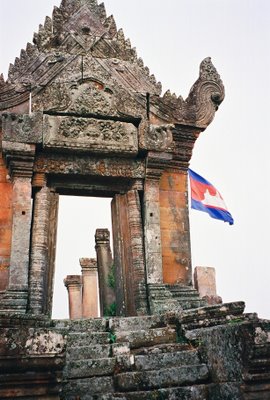 According to english daily newspaper, Foreign Minister Kasit Piromya, who will represent Thailand in addressing the UN body says that:
Russia, India and China might have backed Cambodia’s aggression against Thailand on February 4. But sot far no proof or evidence has been produced by Thailand to sustain Kasit accusations

Thailand will finally face off with Cambodia over the recent military clashes, at the United Nations Security Council next week, after earlier insisting that the border conflict be settled only at the bilateral level.

“Cambodia has only a single objective – to have the Preah Vihear [World Heritage designation] and claim the 4.6 square kilometres of disputed area,” Kasit said at a seminar held by the Senate’s committee yesterday.

“Russia, India and China might have backed Cambodia’s aggression against Thailand on February 4, and now Cambodia is taking the issue to the UN Security Council.

“Although Cambodia is creating the perception that it is being harassed by Thailand and trying to win sympathy from the international community, Thailand will not allow Hun Sen, a bully boy, to bully Thailand,” Kasit said.

BP: Now, when Kasit previously called Hun Sen a vagrant and mentally unbalanced (amongst other insults), at least he did before he became Foreign Minister.

This time, what is his excuse? Now, the problem is not what he called Hun, which btw he didn’t say bully boy – a more accurate translation of ”เด็กเกเรตอแยอยู่ข้างบ้าน” would be naughty/misbehaving boy next door who makes a nuisance of himself – as well frankly Hun Sen and Kasit only tolerate each other as they have too, but well Russia and China are permanent members of the Security Council (permanent members have a veto).*

Well-known UN reporter Matthew Lee’s sources say that two Security Council Members had wanted the Security Council to convene a meeting and if you read between the lines Russia appears to be one of them so perhaps Kasit is just reflecting what he is being told by Thai diplomats in New York.

Nevertheless, why say publicly that they were backing Cambodia’s aggression against Thailand without providing proof of this. If Kasit had some form of evidence then that is one thing, but he is almost speaking off-the-cuff here. It is embarrassing.

*Almost all other newspapers (Naew Na and ASTV Manager) say Kasit said France and not China, but France is also a permanent member.

Read the original here:
Are Russia and India backing Cambodia’s aggression against Thailand?

China called again for calm and restraint from both Cambodia and Thailand on Thursday to prevent an escalation of border tensions between the two southeast Asian countries.

Where are the Russians, and the Indians ?

“Cambodia and Thailand are China’s friendly neighbors. After clashes broke out, China has maintained close contact with the two sides and has persuaded them to resolve disputes through consultation,” Foreign Ministry spokesman Ma Zhaoxu said at a regular news briefing.

As to the United Nations Security Council meeting on Feb. 14 to discuss the border dispute and Cambodia’s call for UN peacekeepers to the border region, Ma said: “we are aware of the reports and will keep in touch with the relevant parties.”