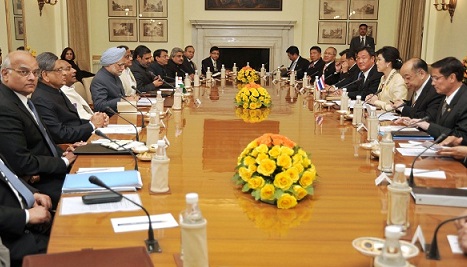 Thailand is seeking a strategic partnership with India and is ready to develop bilateral cooperation between the two nations at all levels while seeking ways to foster the relationship between the Association of Southeast Asian Nations (ASEAN) and India.

Indian business people have been urged to invest more in Thailand, which will link India with other countries in ASEAN and the Greater Mekong Subregion.

The Thai premier said that Thailand has emphasised bilateral relations with India through a ‘Look West and Look East’ policy to strengthen close ties between the two countries.

She praised the significant growth and development of India during the past two decades as India has played an increasingly prominent role in the world arena and more Indian businesspersons were ranked in the annual Fortune 500 list of top global companies.

Thailand and India will mark the 65th anniversary of diplomatic ties this year, which is a good opportunity for the two countries to develop bilateral ties as strategic partners for mutual benefit at the regional and international level, she said.

Thailand has proposed speeding up negotiations to wrap up the Thai Indian Free Trade Agreement (FTA) by March in order to implement a Thai Indian FTA by mid-2012, aiming to double the two countries trade volume by 2014.

During talks between Yingluck and Indian Prime Minister Manmohan Singh on Wednesday, the two countries agreed to speed up negotiations on a free-trade agreement (FTA) in goods, services and investment by March in order to reach conclusion by July.

Six agreements were signed after the talks, which included the transfer of sentenced persons, a memorandum of understanding on defence cooperation, and amending the framework agreement for establishing an FTA.

The framework agreement of the FTA was modified by adding an item for an early-harvest scheme, an official said.

The two countries will promote cooperation in science and technology, cultural exchange and cooperation between Thailand’s Chulalongkorn University and the Indian Council for Cultural Relations at the India Studies Centre at the Thai university.

Indian business people have been urged to invest more in Thailand, which will link India with other countries in ASEAN and the Greater Mekong Subregion.

Prime Minister Yingluck Shinawatra, during her visit to India from January 24 to 26, stimulated confidence in Thailand among Indian investors and called for the promotion of Thai-Indian partnership.

She told Indian business people that Thailand was building road and rail linkages to Thailand’s neighboring countries and beyond, which would open new trade and investment opportunities. It is also planning to construct a sea route linking Chennai Port in India with Dawei deep-sea port in Myanmar and Laem Chabang deep-sea port in Thailand.

Since the signing of Thailand-India Free Trade Agreement in 2003, bilateral trade rose significantly from one billion US dollars to more than seven billion dollars now. Prime Minister Yingluck said that both countries would accelerate the completion of Thailand-India FTA by the middle of this year, with the target to increase the two-way trade to 14 billion dollars by 2014.

She pointed out that Thailand has a strong economic foundation and the country’s economic growth this year is expected to be 5 percent. The country has also enjoyed fiscal stability and its policy is favorable to investors and business people. The corporate tax now stands at 23 percent, and the rate will drop to 20 percent next year.

Thailand also has labor of good quality to accommodate foreign business operation. Regarding flood prevention, she explained that Thailand was investing more than 11 billion dollars in water resource management. This would ensure that businesses would be free from the flooding in the future. In this connection, effective water management systems would be set up and floodways would be built, while forecast and warning systems would be improved.

The Prime Minister believed that efforts to enhance Thai-Indian strategic partnership would help expand business growth between the two countries and explore cooperation in various fields, such as information technology, tourism industry, and medical services. She expressed support for the organizing of a CEO Forum to promote bilateral investment.

In her meeting with Thai business people in India, Prime Minister Yingluck said that the Government would form a working group to ease trade barrier between the two countries. Thai investments in India now stand at 81.77 billion dollars Thai investors asked the Government to negotiate with India land allocation for them and the tackling of double taxation. Thailand would like to increase flights between both countries, as well.