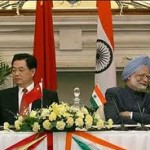 Two articles in the Wall Street Journal this week contain thoughts bearing on the debate regarding the relative virtues of China’s authoritarianism and India’s free-wheeling, cacophonous democratic system.  Countless paeans have been written about the triumphs of centralized, technocratic pragmatism in Beijing.
The closed-door, brutally efficient decision-making may not be all that great in terms of human rights and civil liberties, but business executives and pundits around the world marvel at the policy outcomes it has delivered: Three decades of blistering economic growth; rapid industrialization and urbanization that has utterly transformed what was not too long ago an agrarian society; and an epochal shift in the global balance of power.

China’s success has feed the notion that there is something of a Faustian bargain between economic prosperity and democratic governance.  This view was especially prominent in the “Asian values” debate of the mid-1990s (here and here) but it persists in the conventional wisdom that India’s messy democracy is a hindrance to the country’s efforts to catch up with China.

Some years ago, New York Times columnist Nicholas Kristof opined that due to political disorder Indian “economic policy-making isn’t nearly as shrewd, pro-growth or farsighted as China’s.”  More recently, Charlie Munger, Warren Buffett’s long-time business partner, averred that while the Chinese government “can get things done,” the Indian system is mired in “paralysis.”

In view of China’s awe-inspiring performance, it is thus easy to dismiss the profusion of wild rumors that came out of Beijing in recent days.  But their proliferation – driven largely by a system of governance explicitly designed to frustrate inquiry by citizens and media alike – indicates that high-level political strife of some kind is occurring behind closely-guarded scenes.

India to open super highway to Burma and Thailand

A year of Defrosting of India-Pakistan relations