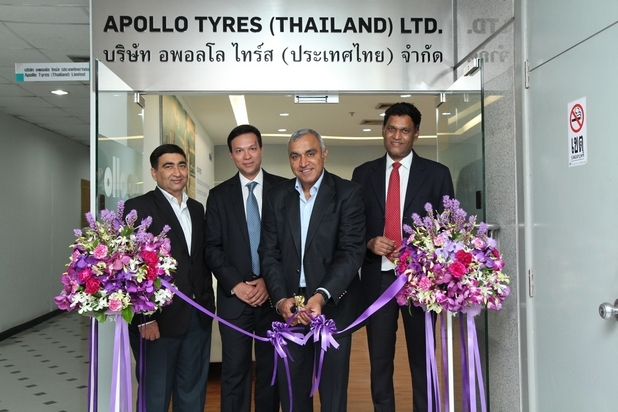 Apollo Tyres Ltd. has opened a sales office in Bangkok that will be the Indian tire maker’s hub of operations for Southeast Asia, which accounts for more than 40 percent of the company’s exports.

The opening of the Bangkok office to serve the countries of the Association of South East Asian Nations is the second regional office opening of the past two years. Mumbai, India-based Apollo opened an office and warehouse in June 2011 in Jebel Ali, Dubai, to serve customers in the Middle East.

Apollo said its revenue from sales throughout the ASEAN region has doubled in the past three years and it anticipates these revenues will continue to grow at double-digit rates the next several years. The company said it already has a “sizable” distribution network in ASEAN, without disclosing specifics.

“In the last few years, due to high customer satisfaction, the demand and acceptability of our tires has increased manifold in the ASEAN region,” said Satish Sharma, chief, Zone I, speaking at the recent opening of the office.

“We are looking at the Bangkok office to serve as a hub for an active sales and service team. This will allow us to meet customer expectations with greater ease and swiftness.”