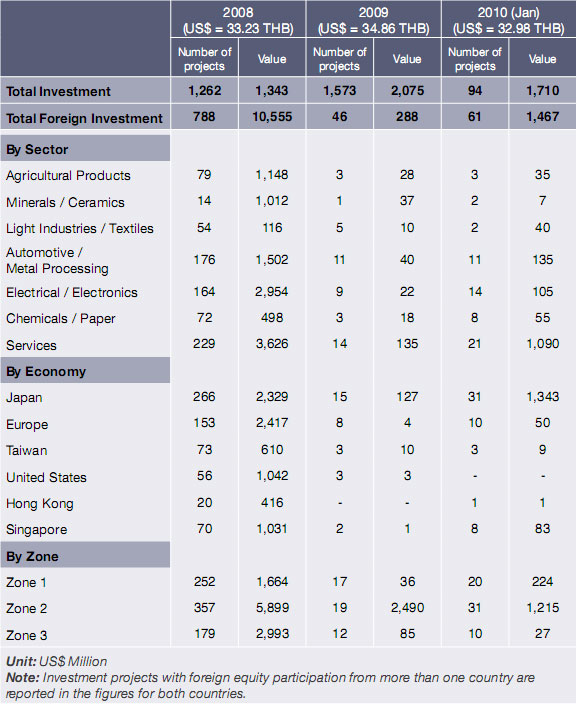 Thailand’s investment picture continues to be one of bright prospects and favorable confidence as 2010 builds on impressive reports. The number of projects that applied for incentives from the Thailand Board of Investment (BOI) in 2009 exceeded the target set for the year by a whopping 80%, coloring the local business environment with much optimism.

Some 1,573 investment promotion applications were submitted to the BOI last year, representing a potential value of 723.4 billion baht. That is the highest annual fgure ever, according to the Board’s announcement on 20 January. The big leap was attributed to the success of the Thailand Investment Year 2008-2009 campaign, which ended 31 December last year. The program focused on stimulating cont inuous investment and strengthening already competitive sectors in the country. At the height of the global crisis in the early months of 2009, the BOI added to the list of activities eligible for Investment Year benefts as a means of spurring economic growth in Thailand Among the beneficiaries were high-tech businesses engaged in the manufacture of telecommunication parts semiconductors, hard disk drives (HDDs) and automotive electronics.

BOI Secretary General Atchaka Sibunruang said the applications surge indicates that Thailand remains a favorable destination in the eyes of foreign investors. This comes despite hurdles such as the global economic slowdown and court-ordered delays to industrial projects at Map Ta Phut in the eastern part of the country. A breakdown of applications shows that in 2009 foreign investors were most attracted to Thailand’s services and public utilities, electronics and electrical appliances, agriculture and agricultural products, and automobiles and parts sectors. Constituting the biggest category, the 709 projects in services and public utilities have a potential investment value of 430.8 billion baht. Many of these are in alternative energy, including the production of electricity from wind and solar power and natural gas. Some 219 electronics and electrical appliance projects worth 101.0 billion baht applied for investment incentives from the BOI last year. These were concentrated in the manufacturing of HDDs, memory storage equipment, digital camera parts, car electronics, and air-conditioners and refrigerators. Agriculture drew in 212 projects totaling 66.8 billion baht in potential investment.

Thailand has a better infrastructure than other nations in Southeast Asia, foreign investors said. The majority opinion was also that market demand in Thailand is stronger than in the competing countries of Vietnam, the Philippines, Malaysia and Indonesia.

Signifcant among these was the manufacture of fuel from agricultural products such as ethanol. In the automobiles and parts sector, applications were made for 216 projects worth 55.4 billion baht, including the production of parts for natural gas vehicles. While most of 2009’s investment-beneft applications were midsize projects, 106 of them can be considered large projects with a minimum investment capital of 1 billion baht each. To foster an environment for sustainable development, BOI Secretary General Atchaka revealed that the Board has approved a proposal to carry over certain measures of the 2008-2009 Thailand Investment Year package that have expired but are still useful. Foreign Investors Staying Put Other recently publicized fgures also point to continued interest in Thailand’s business environment. The BOI’s 2009 Foreign Investor Confdence Survey found it very good news for Thailand that none of the responding companies plan to withdraw their base from Thailand, 30% are even planning expansion, and 59% intend to maintain their current level of investment. About 30% are even planning expansion. Only 11% aim to scale down their investment in Thailand.

The fndings stemmed from questionnaire responses by 576 businesses with foreign investors holding not less than 20% of shares. Surveyed companies also expressed that Thailand’s land and labor costs, workforce quality and government incentives remain factors that make investment in the country attractive. Even so, some respondents called for greater government transparency and a more flexible monetary policies. Thailand has a better infrastructure than other nations in Southeast Asia, foreign investors said. The majority opinion was also that market demand in Thailand is stronger than in the competing countries of Vietnam, the Philippines, Malaysia and Indonesia. In addition, the confidence survey found 94% of respondents satisfed with services obtained from the BOI. As for the overall viewpoint on the government’s various policies, the majority of investors said most measures being implemented have the potential to improve Thailand’s business environment. Still, they suggested sharper clarity on key policies. Foreign investors also recommended closer coordination between government agencies, and even suggested an increased use of e-mails and newsletters as channels for communicating policy measures and new investment opportunities.

Investors positive on Court ruling, SET on the rise