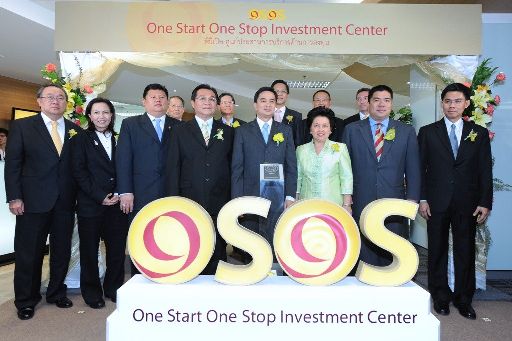 The Board of Investment (BoI) has reported a 31.7% increase in foreign investment applications in the first four months of 2010, worth 53 billion THB in total.

BoI Secretary-General, Dr Atchaka Sibunruang, stated that the foreign direct investment (FDI) from January to April this year indicated foreigners’ firm interest in investing in Thailand. She elaborated that 245 foreign projects had filed their investment promotion applications, increasing by 31.7% year-on-year.

Dr Atchaka pointed out that the accumulated investment value of the FDI projects in the first four months grew 146% to 53.30 billion THB from 21.67 billion THB of the same period last year. Of the 245 projects, 130 are new ones with a value of 24.51 billion THB while the other 115 are expansion projects worth 28.78 billion THB.

New One Start One Stop Investment Center provides comprehensive services offered to investors at one location.The Board of Investment (BoI) has reported a 31.7% increase in foreign investment applications in the first four months of 2010, worth 53 billion THB in total.

“These are solid trends that bode well for the success of the government’s second economic stimulus package, which includes investment in various mega infrastructure projects as well as aims to position Thailand as the connectivity hub for ASEAN. The BOI is moving confidently and quickly to invigorate the investment climate to fuel overall economic expansion,”

The BOI is also looking into providing short-term assistance and working closely with investors to listen to their needs and concerns. Dr Sibunruang has reaffirmed the BOI’s commitment to maintaining supportive investment policies and assisting investors in doing and expanding business in Thailand. To further enhance Thailand’s competitiveness, the BOI will introduce a series of new policy measures aimed at promoting investment for sustainable development and emphasizing Thailand’s core strengths.

“Earlier this year, we have launched a set of measures targeted at promoting investment in key future-growth sectors such as energy conservation and alternative energy, eco-friendly materials and products, and high technologies. Additional incentives are also being offered to encourage companies to invest in energy conservation and environmental protection. New measures will soon be introduced to attract investment in health care, creative industries, human resource development, science and technology. BOI believes that our quick response and measures to energize the investment climate will help achieve continued positive results,”