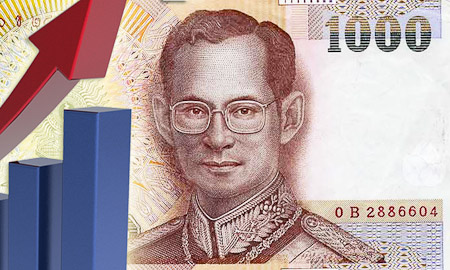 Speaking after meting JFCCT representatives, he said the JFCCT chairman cautioned the Thai government not to be complacent regarding the continued growth of the economic and industrial sectorsWhat foreign investors are concerned about now is the lack of stability of the Thai currency.

They want the government to oversee the baht to boost its stability as much as possible, he said.Mr Chaiwut said the Board of Investment BoI will consider ways to help entrepreneurs deal with the bahts volatility when it meets with Prime Minister Abhisit Vejjajiva and will consider improved privileges to be granted to small- and medium-size enterprises SMEs.

Prime Minister Abhisit Vejjajiva, fearful of the effects of the soaring baht due to massive capital inflows, has proposed the use of the Chinese yuan as a major regional trading currency.

It was the first time he had an opportunity to meet and discuss with BoI and JFCCT after assuming his ministerial post, he said.More than 30 investors joined the discussion focusing on ways to cope with obstacles to business performance of foreign investors in Thailand such as difficulties in applications for temporary visas for tourism and investment, telecommunication problems, and unclear customers and tax systems.

Thai Finance Minister Korn Chatikavanij has said that he did not expect the 600 billion U.S. dollars injection into the U.S. economy to have any immediate effect on the Thai currency and its capital market.

Korn said the Thai government’s existing measures remained effective enough to control the rising baht as the US Federal Reserve’s announcement was in line with the government’s earlier estimate of 500-700 billion dollars, according to local media reports.

The US Federal Reserve announced Thursday that it will buy an additional 600 billion dollars of treasuries through June next year, which could further depreciate the greenback.

Central banks from China to India and Australia have raised interest rates to curb inflationary pressures at a time when Japan and the U.S. are adding monetary stimulus to boost economic growth.

Meanwhile, Thailand’s central bank governor Prasarn Trairatvorakul has confirmed that he has discussed with other central banks in the region, which are ready to impose joint measures to curb further speculative money in-flow.