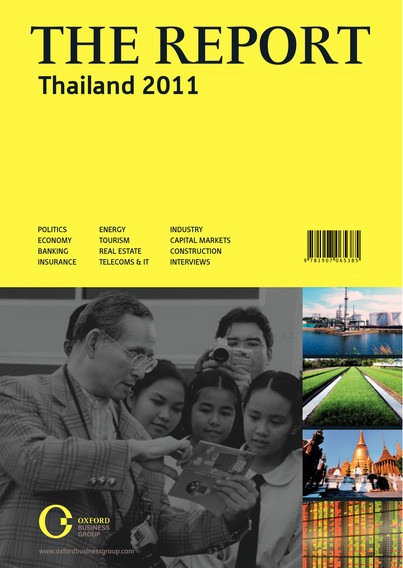 With its excellent location, growing economy, rock-solid industrial sector and creative opportunities, Thailand remains very attractive to overseas investors, according to “The Report: Thailand 2011” released in June by the Oxford Business Group (OBG).

The report describes the country’s economic and investment picture as “an impressive display of resilience.” A global publishing and research consultancy, the OBG said Thailand is “a magnet for foreign direct investment” because of its strong industrial sector with specialized estates, master plans by the government, and incentives granted by the Thailand Board of Investment (BOI).

Supporting this, the report noted that UNCTAD’s World Investment Prospects Survey lists Thailand among the top 15 most attractive investment destinations globally. The OBG also drew attention to the BOI’s current efforts to promote Thailand as an ideal regional operating headquarters.

The Thai manufacturing sector was given high marks, especially across the export sector from automotive to electronics to food. “Indeed, it is the bedrock of manufacturing and industry that has kept Thailand’s economy ahead of its peers in recent years, and which has also helped to rapidly reestablish the country’s economic prosperity,” the report said. It also called Thailand’s banking system “resilient and virtually unaffected by the global financial crisis.”

Performance in various other sectors was also recognized, including the country’s vibrant petrochemicals and energy industries. Thailand is a net exporter of many energy products and a major energy importer, with current government policy highlighting alternative energy to help meet demand. The report praised Thailand’s agriculture industry for being one of only five net exporters of food worldwide. Through enhanced R&D, food processing is seen as moving up the value chain. In addition, the tourism industry has rebounded as 2011 arrivals are projected to reach 16.5 million, higher than a year earlier. China, South Korea, India and Russia are perceived as fast-growing tourist source markets.

But even as the economy and investment in Thailand whirr along, the report acknowledged there are some challenges to continued strong growth. It emphasized domestic political stability and the global economic recovery as main factors in investor confidence. To boost the country’s competitiveness, the government was encouraged to increase investment in science and technology, education and infrastructure. Such progress would strengthen Thailand’s competitive position as the region removes trade barriers upon creation of the massive ASEAN Economic Community single market by 2015.

The 2011 edition of the report features interviews with Thailand’s most prominent economic and business leaders, who provide their special insight. Moreover, it includes commentaries about Thailand and the global situation by distinguished personages ranging from His Majesty King Bhumibol Adulyadej of Thailand to UN Secretary General Ban Ki-Moon to US President Barack Obama.

In the interview with BOI Secretary General Dr. Atchaka Sibunruang, she emphasized that economic develop is the goal of the Thai government. “The government’s policy is in line with a global trend of sustainable development and is supportive of environment-friendly investments, including green energy, recycling and related activities,” Atchaka said.

Another important strategy is to invest in the future through human resources development and R&D. Atchaka said now that large companies in Thailand have recognized the importance of investing in R&D, the hope is that small and medium enterprises will spearhead the trend going forward.

The OBG report also noted that the BOI is promoting the creative economy concept in many sectors, from software to the media to wellness.

The increasing attractiveness of Thailand as an investment location is evident in the latest figures released by the BOI. In the first six months of 2011, the number of applications for investment promotion filed at the BOI grew by 43% y-o-y to 882 new projects worth 247 billion baht. That already exceeds half of the Board’s initial target for the whole of 2011. Investment value climbed 36 percent in the January to June period.

OBG’s new report features detailed analysis of the growth in Thailand’s tourism industry, exploring figures indicating that the number of visitors reached almost 16m in 2010. There is also coverage of the government’s planned drive to boost the Meetings, Incentives, Conventions and Exhibitions (MICE) segment. Oxford Business Group’s Country Director for Thailand, Anne Delarue, highlighted the resilience that Thailand’s economy had displayed during 2010 when faced with both domestic and international challenges.

“Despite the unrest in Bangkok early last year and fall-out from the world financial crisis, Thailand has moved forward with its plans to diversify its economy,”

“OBG’s team of analysts has gained a reputation among the international business community for tracking developments across all sectors of Thailand’s economy and documenting them as they happen. I am confident that our new report has raised the bar once again with its wide-ranging coverage of the country’s changing economic landscape.”

Delarue added that OBG’s partners made a significant contribution to the Group’s research process during the groundwork for The Report: Thailand 2011. “The synergies in our partnerships have undoubtedly added to the overwhelming success of our coverage of the Thai economy and provided our new publication with an edge,” she said.