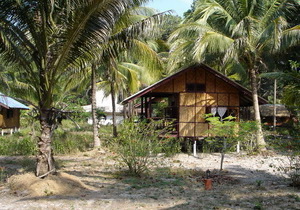 Last week, we said a property buyer should have an agreement to make sure he or she gets the deposit back if something turns out to be wrong with the title.

Let’s look at an example. Suppose you have decided to buy a two-bedroom house at a development close to the sea. It’s a gated community with many facilities, such as a pool and tennis court.

Several other foreigners already live there and the place looks well-maintained.

Somebody has to go to the land office on your behalf and check to make sure the title is clean.

The developer presents you with a set of documents, explaining that what you’re buying is a 30-year lease on a piece of land on which he’ll build a house for you, once you’ve paid. You sign all the papers. He does, too. You give him part of the money and he starts work on the house. But you’ve forgotten a step.

Long before this, somebody has to go to the land office on your behalf and check to make sure the title is clean.

If you don’t, you may not be buying anything.

There were treaties allowing citizens of 16 countries to own land in Thailand but they were terminated on Feb 27, 1970. Since then, Thailand has not entered into any treaty that would allow foreigners to own land.

What a foreigner can own is a long lease. How long? Generally, it’s 30 years, because Section 540 of the Civil and Commercial Code provides that the duration of a lease can’t exceed 30 years, and if it does, the period must be reduced to 30 years. Section 538 of the code would allow a lease for the life of the tenant, and if the tenant lives longer than 30 years, the lease will continue for this period.

via Property in Thailand: Part 10 What about title for a buyer? | Bangkok Post: news.

Acquisition of Land by non-Thai citizens: what are the conditions ?

EU-Singapore FTA to be concluded