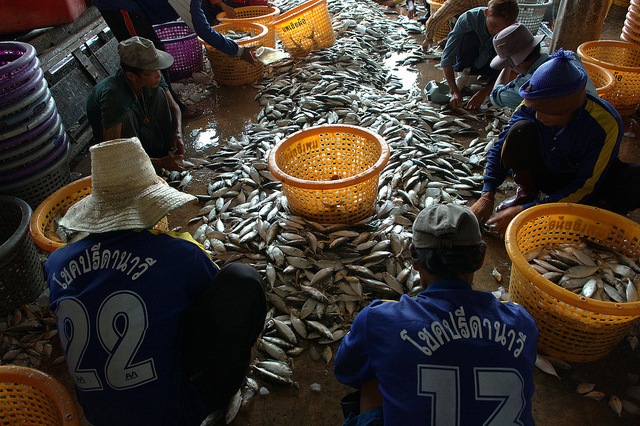 A new report has found shortfalls in Thailand’s fishing industry in relation to national and international labour standards. The report, co-authored by the International Labour Organization (ILO) and the Asian Research Centre on Migration at Chulalongkorn University, is based on 596 interviews, making it the largest survey to date of working conditions in the Thai fishing sector.

While most of the fishers surveyed entered the fishing sector voluntarily, 32 respondents (5.4 per cent) stated that they were deceived or coerced into work in fishing. The problem was especially pronounced among long-haul fishers, with nearly one in six of the long-haul fishers surveyed (16 per cent) stating that they did not willingly decide to work on a fishing vessel.

Of these 32 respondents, 17 workers stated that they were “deceived or forced to work by the agents from the country of origin”, nine workers said it was agents from Thailand and six their family or relatives.

Thailand is a major supplier in the global trade in fish products. Picture : Burmese migrants and Thais sorting out fish at Mahachai port © ILO/ Thierry Falise

The study found that approximately 17 per cent of those surveyed said they were working against their will and unable to leave because of the threat of penalties. These workers fell into two groups; those who could not leave because of a financial penalty (12 per cent), and those who cited other reasons including the threat of violence or denunciation to the authorities (4.9 per cent). Conditions were found to be worse for those who had been at sea for more than one month; nearly 25 per cent were subjected to deceptive or coercive labour practices.

The survey also found 33 children under the age of 18 working on fishing vessels, of whom seven were under 15

Under the Thai Ministerial Regulation No. 10 and the ILO Work in Fishing Convention, 2007 (No. 188) those aged 15 and above can work on board ships in certain circumstances, including if the work is not considered hazardous (Thailand has not ratified this ILO Convention No.188).

However, the report notes that this represents “a grey area with regard to child labour, because some work in fishing can be considered hazardous for children, and this can include night work”.

Thailand is a major supplier in the global trade in fish products, with fish exports exceeding US$7 billion per annum in recent years.

The National Fisheries Association of Thailand (NFAT) has estimated that a total of 142,845 fishers are employed by their members, but the fisheries-related enterprises and supporting industries employ many more. Concerns about abuse and exploitation of fishers, particularly migrant fishers, have led to calls from human rights groups, the international community and retailers for the Government and industry to strengthen regulation and protection. However, the true scale of the problem was unknown and additional empirical data was needed.