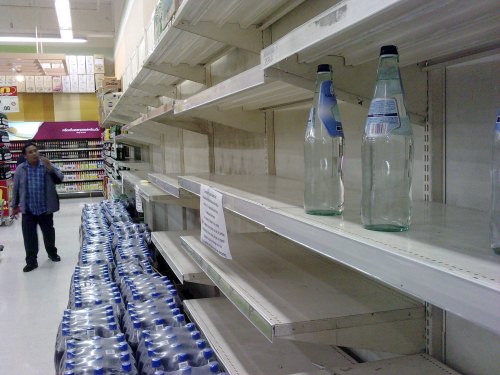 The Thai government on Tuesday approved a plan to import food and drinking water to ease current and anticipated shortages following the worst flood in the nation’s history, according to Permanent-Secretary for Commerce Yanyong Phuangrach.

The shortages have occurred after the flood hit factories in seven industrial estates, leaving them submerged, so that both production and distribution of goods face transport difficulties because many roads are cut due to the flood, and a panicked populace is stockpiling food and drinking water.

He said the Commerce Ministry would initially be a centre for fast track imports of such products by working with the Food and Drug Administration FDA, the Customs Department, the Excise Department, the Thai Industrial Standards Institute and the Finance Ministry to cut short procedures and import the essential items within one week. Mr Yanyong said Prime Minister Yingluck Shinawatra and Deputy Prime Minister/Commerce Minister Kittirat Na Ranong have assigned the ministry to arrange additional goods distribution centres because the centre set up at Don Mueang Airport could handle only 10 per cent of overall consumer products.

via Thailand to import food, drinking water to ease shortage.

Quality of Living Survey: Better be in Vienna than Bagdad