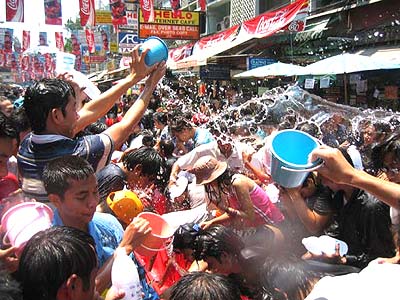 What is going on with you guys ? Have you ran out of cheap rice whiskey, mountains of ice and flows of mixers ? Or have you just been driving around the Asok intersection too much recently ? You Thais have less fun then the Germans and the Turks. Yes, the Germans, this is not a misprint or a joke.

Can you believe that ! Those fat idiotic barking beer guzzling farangs are having more fun than the indisputables kings of sanuk, I mean the Thai people. Where is this country going.

The world’s first study to rank nationalities according to how often they have fun reveals that the secret is living somewhere hot, preferably Spanish-speaking and ideally in Latin America. My advice : stay in Thailand and learn Spanish.

Thais only rank in 12th position for having fun

In a private survey ranking countries by how often they have fun, it appears Americans and most Europeans enjoy themselves more than Thais,  but Argentinians and Mexicans rank top.

Thais only rank in 12th position for having fun

The survey carried out by Badoo, which claims to be the world’s largest social network for meeting new people, ranks Thais 12th out of 17 nationalities. The site’s global ”Fun League” canvassed 17,000 mainly young people in 17 countries.

Argentinians and Mexicans, at any rate, top the first global fun rankings – compiled by Badoo.com, the world’s largest social network for meeting new people. Poles and Russians rank last by some margin, with neither having much fun at all.

“This makes Argentinians the world champions of fun”, says Louise Thompson, Director of PR for Badoo, a site for chatting, flirting, dating and meeting new people, with over 170 million users across over 180 countries.

“How often do you really have fun and a good time (such as when going out socially or seeing friends?)” Those polled were mainly in their twenties and thirties.

Despite their economic troubles, the Spanish top the European fun rankings, while Spain also emerges as the world’s largest exporter of fun, in the sense that nationalities of Spanish heritage bag three of the top four spots in the world rankings. Only the Turks, who edge the Spanish into fourth place, prevent complete Hispanic domination.

Jawohl mein Herr ! Among the study’s surprise findings is that the famously hard-working but fun-shy Germans report having more fun (12 days a month) than do the famously fun-loving Brazilians (11 days).

If the Germans are having more fun than the world thinks, the French are perhaps having less. They rank fourth last of the 17 countries in Badoo’s study; even the Swiss and Canadians have more fun. “Having fun is often about letting go and being spontaneous”, says Thompson. “Perhaps the French sometimes place more emphasis on discipline and self-control?”

Americans rise sufficiently above the Puritanism of their founding fathers to place a respectable sixth in the world rankings. Young Americans average nearly 12 days of fun a month. This places them well ahead of Canadians, their neighbours to the north, on 10 days, but well behind Mexicans, their southern neighbours, on nearly 14 days.

Americans have more fun than either Italians or Brazilians but less than those wild and crazy Germans.

But then when it comes to fun, Americans wrote the song – or, at least, the Beach Boys did, with their 1964 hit, “Fun, Fun, Fun”, which helped promote the image of California as being the fun capital of the U.S. and the spiritual home of a laid-back, fun-loving lifestyle.

Its only serious rival is New Orleans, not just the birthplace of jazz but also host of both last Sunday’s Super Bowl and of America’s most famous carnival; the annual New Orleans Mardi Gras, staged this year on February 12th.

It was, meanwhile, another American, Woody Allen, who once confessed, “Most of the time I don’t have much fun. The rest of the time, I don’t have any fun at all.” Allen was speaking for himself but might almost have been describing the Poles, who have least fun of any nationality.

“The ability to have fun is both an art and a talent”, says Louise Thompson. If so, it’s a talent that some nationalities seem to possess more than others. They tend to be the ones that who are more sociable, lively and spontaneous.

“It’s certainly not just one carnival or fiesta that makes some nationalities so good at having fun”, says Thompson. “It is the whole culture, lifestyle and attitude to life.”

Despite the surprise success of the Germans, Badoo’s findings broadly confirm the expectation that residents of hot, southern countries have more fun than those of cold, northern countries, where the local idea of fun sometimes seems to be huddling in cafes and sighing heavily into the coffee.

“The right climate definitely helps”, says Thompson. The climate in countries like like Argentina and Mexico means, for example, that people stay out late at night, while discos, bars and restaurants all close later than in cold countries.

“The real secret of having fun seems to be living somewhere hot and speaking Spanish”, says Thompson. “It’s the perfect combination