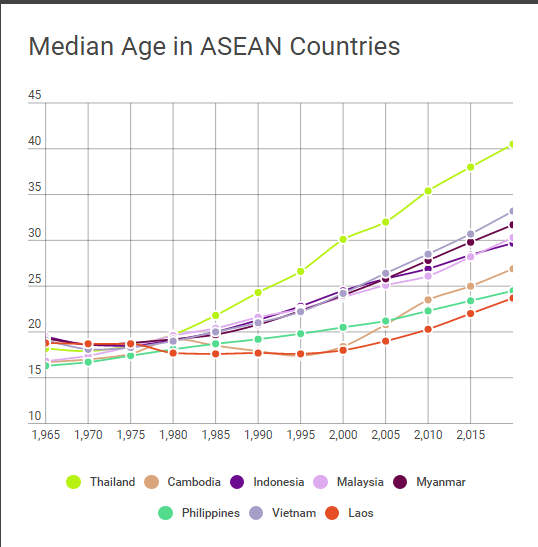 Thailand’s stage of economic development, the rising cost of living and education, and a population waiting longer to get married are among the reasons it is aging more quickly than its neighbors.

With Thailand’s greying population set to rise rapidly over the next decade, property developers are now poised to launch more high-rise and low-rise residential projects with designs and facilities aimed at supporting elderly care as well as the health-conscious.

Pornsak Bowornsrisuk pulls an umbrella toward him to shield his head of thick gray hair from the blazing sunshine at the Bangkok bus terminal he manages.

“You’ve got to be damned tough to do this job,” says the 63-year-old, who records bus arrivals and departures, and adds up fares collected from journeys across Thailand’s capital.

Septuagenarian bus conductor Pranom Chartyothin moves nimbly to a door to guide students off the vehicle. She waves at the driver, 66-year-old Plang Pansaior, who glances in his rear-view mirror before pulling away.

Such scenes will only become more common in Thailand as its population rapidly ages, unlike its neighbors with more youthful populations. The World Bank estimates the working-age population will shrink by 11 percent by 2040, the fastest contraction among Southeast Asia’s developing countries.

Thailand’s stage of economic development, the rising cost of living and education, and a population waiting longer to get married are among the reasons it is aging more quickly than its neighbors. An effective contraception program in the 1970s also played a part, said Sutayut Osornprasop, a human development specialist at the World Bank in Thailand.

Developers are launching projects with the elderly market in mind

With Thailand’s greying population set to rise rapidly over the next decade, property developers are now poised to launch more high-rise and low-rise residential projects with designs and facilities aimed at supporting elderly care as well as the health-conscious.

SET-listed Nusasiri Plc is one such developer. It introduced its health-promotion concept two years ago in two residential projects in Khao Yai and Pattaya. This year it plans to expand two more on Rama II Road in Bangkok and in tambon Pa Khlok, located in Phuket’s Thalang district.

According to “Situation of the Thai Elderly 2014”, a report by the Foundation of Thai Gerontology Research and Development Institute, the number of Thai people aged 60 and over reached 10 million in 2014, accounting for 15% of the total population.

After this, Thailand will enter a super-aged society, when a country’s elderly population makes up 21% or more of the total, as defined by the UN.

“Our health-promotion concept in residential projects is designed not only for elderly people but also for the new generations who are concerned about health,” says Mrs Siriya. “They don’t need to wait until they become elderly to start paying attention to their health.”

Nusasiri launched the concept at Nusa My Ozone Khao Yai, a single-detached residence worth 3.8 billion baht located on a 1,200-rai site in Pak Chong district in Nakhon Ratchasima.

Phase one, which saw the construction of 45 units priced between 15 and 50 million baht, has eight units remaining to be sold following its launch in 2014.

“The location in Khao Yai is good for promoting the concept, as it is close to the seventh best ozone region in the world. The weather is very nice all year long,” she says. Of the total 1,200 rai, 75% or 900 rai will be set aside as a green area.

Facilities include a medical centre with 24-hour emergency helicopter service, an 18-hole golf course and a five-rai organic farm.

Units are designed for the elderly, with special facilities such as ramps at the gates for wheelchair users, sliding doors, touch screen light switches, floors with no steps and smart alert systems for emergency calls.

Online gambling in Asia and Thailand in particular