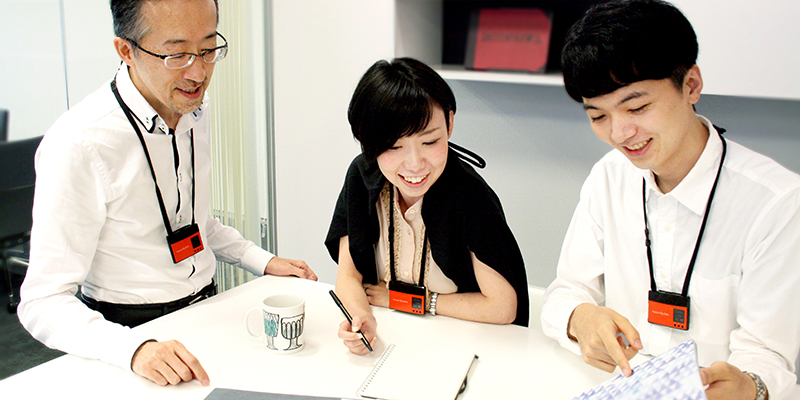 The nature of work is changing rapidly, with some of the most transformational innovations taking place at the intersection of data and employee performance.

Just as top athletes monitor their biometric data in order to boost performance, companies have also begun to gather data about their employees in order to give them a competitive advantage.

US-based Humanyze has developed a smart badge that includes a microphone for real-time voice analysis, a device that tracks the wearer around the workplace, a Bluetooth sensor that can scan for proximity to others, and an accelerometer to monitor physical activity.

The behavioural data collected includes the tone of the employee’s voice and whether he or she physically leans in when speaking to co-workers. Once uploaded to the cloud, the data can be used with other business metrics via a dashboard, enabling companies to make adjustments in working conditions and to measure the effectiveness of their changes through A/B testing (which compares two variants to see which performs better). Controversial for some, but a great business tool for others.

The trend for using wearable sensors is rapidly growing

According to marketing group ABI Research, around 202 million wearable devices were given out by companies in 2016, with ABI predicting that number could reach 500 million by 2021. Wearable sensors are already being used to track everything from number of steps and amount of water consumed each day, to time spent talking with co-workers and wakefulness.

The growing diversity and availability of wearable sensors also promises to remove barriers to remote and flexible working by allowing companies to collect data on their employees’ productivity wherever they work.

By bringing technology to the worker, instead of the worker to the technology, wearable sensors may eventually also offer remote employees a greater ability to connect with other employees, work more safely and adjust their own work environment.

A picture of health

Health and safety is a key area where wearables are leading to improvements – helping workers to stay fit and healthy can decrease insurance costs and days lost to illness and injury. Devices such as Zensorium’s Being smart watch can monitor sleep cycles, along with heart rate, calories, steps, movement speed and other data. Once analysed, the data can be used to help employees hit health and wellness goals.

For example, if the data reveals a blood pressure increase, an automated message could be sent with a suggestion to take a break, with Zensorium then guiding the user through deep breathing exercises to help them calm down.

Another example is BetterWorks, a platform and smartwatch app that monitors goals created for every employee and tracks performance.

The tool offers dynamic, responsive visuals which encourage greater degrees of transparency and interaction among the workforce. Users are encouraged to utilise the social aspects of the platform, virtually ‘nudging’ and ‘cheering’ co-workers depending on their performance.

But wearables can measure more than just whether employees are getting enough exercise. Devices such as Kinetics’ Reflex can detect unsafe postures and high-risk motions, giving instant feedback to workers and allowing employers to adjust policies based on risk data.

Wearables may soon also be able to notify employers about the risks of accidents or illness based on an AI analysis of real-time biometric data.

SmartCap Technologies of Australia already produces a wearable that monitors brainwaves in order to measure fatigue in drivers and operators of heavy machinery, alerting them when they are too sleepy to continue.

Hitachi was an early adopter of workplace wearables, using them to analyse movement, work performance and happiness

The pursuit of happiness

This growing use of wearables has been spurred in part by research that demonstrates a link between happiness, job satisfaction and productivity. As a result, companies have begun investing in ways to measure and improve employee wellness and satisfaction.

One early adopter of workplace wearables was Hitachi, which developed a wearable ID badge to collect millions of hours of data on movement, work performance and happiness. Using an AI system to analyse the data revealed a link between specific physical movements, happiness and work productivity. Hitachi’s research also uncovered unexpected ways to increase productivity on the team level – in one office, employees became happier and more relaxed when their boss left early, while in another office, scheduling meetings for mornings instead of evenings led to more content workers.

Data from wearable sensors can lead to unique work adjustments

When Bank of America tested a badge sensor on call-centre employees, it discovered that they often used their breaks to troubleshoot workplace problems. Adjusting its policies to create more opportunities for workers to talk led to a 10 per cent improvement in productivity. Great news for both employer and employee.

Data on skills and performance could also be used to decide which employees are best suited to particular roles, or to recommend team members for particular projects, based on their personal data. By offering business leaders a deeper level of understanding about how their teams work, AI and wearable devices could well be the key to unlocking greater productivity.

The new age of consent

Amid the advances come concerns about the collection and use of personal data. When offering their employees the opportunity to use wearables, employers should also develop codes of conduct about how they collect, store and use the data they collect.

Transparency around questions such as who owns the data, who has access to the data, how the data can be used and whether it can be sold on is very important.

For example, individual data collected by Humanyze is not given directly to companies, and Humanyze signs a consent form with end users in which they agree not to pass on the data to third parties.

Importantly, before investing in a wearable sensor programme, companies need to consider why they are collecting data and what they hope to gain from it. Firms also need to familiarise themselves with emerging laws around this area, such as the UK’s Data Protection Act and the EU’s General Data Protection Regulation, which require companies to gain consent from employees before collecting personal data. Being able to engage and educate employees about the upside of wearable technologies will ultimately determine their success, while full transparency and well-designed opt-in programmes will allow data collection to be treated as a partnership between employer and employee.

For employers, wearable sensors hold out the promise of a greater ability to design a workplace that improves employee wellbeing and company productivity. This ultimately creates a more satisfied, loyal and well-connected team, both in-house and remotely.

James Bidwell is the CEO of trend forecaster Springwise and author of new book, Disrupt! 100 Lessons in Business Innovation (Nicholas Brealey, 2017). Powered by a network of more than 20,000 springspotters in 190+ countries, Springwise shares the latest trends and innovation ideas from across the globe