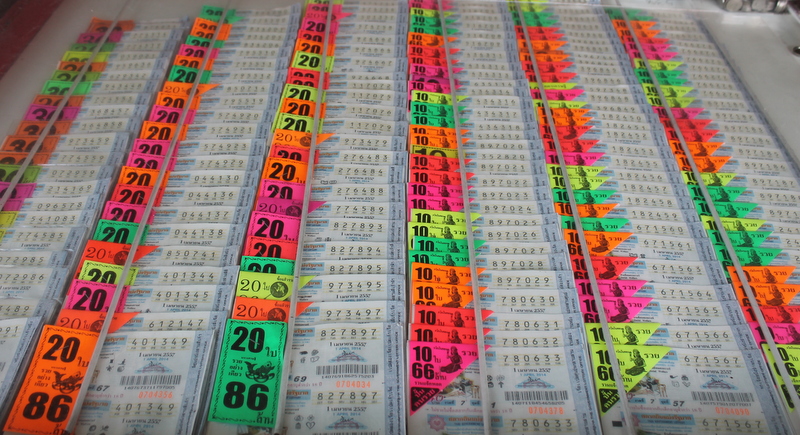 At least twice a month –- on the first and sixteenth days – millions of Thais hope and pray that their fortune will change.

They are glued to their TV set or mobile phones, anxiously waiting for lottery results praying for a miracle.

Thais are increasingly addicted to lottery. The National Statistical Office of Thailand reveals that 47 percent of Thai families played lottery and lotto in 2017, up from 11 percent in 2009.

Every fortnight, lottery addicts try to look for luck by scratching tree trunks or browsing the internet for any clue. It is no surprise that “lottery tips” is one of the most googled words by Thais.

These lottery buyers think that they should spend disposable income on lottery tickets rather on other merchandises because they want to be rich overnight. This is despite the fact that the chance of winning a lottery is slim.

In total, one-fourth or around 20 million of Thais buy lottery and lotto, translating into a combined Bt250 billion annually.

The amount they spend on lottery and lotto is three times higher than the amount of Thais’ investment in Long-Term Equity Mutual Fund (LTF) and Retirement Mutual Fund (RMF), according to TMB Analytics.

Not only the poor, lottery is popular among every group of Thais, according to TMB Analytics.

The findings show that people with high income or over Bt100,000 monthly salary spend around Bt10,000 per year on lottery and underground lotto, which is two times higher than the average amount spent by Thais.

Betting on lottery can be addictive and people are tempted to spend more each time. TMB Analytics reports that lottery and lotto buyers have increased their spending on lottery by 42 percent from what they spent on their first lottery.

Regardless of economic condition, Thais continue to buy lottery

In 2009, during the global economic slump, Thais spent around Bt340 per month or 2.1 percent of their income on lottery.

The working age population aged 35-55 are the biggest spender of lottery as they spend Bt500 per month. Young Thais also start betting early as the figures showed that 10 percent of Thai students play lottery by spending Bt187 monthly.

In fact, these people could have been a millionaire simply by saving this disposable income in their piggy bank rather than lottery tickets.

Based on these figures, TMB Analytics said that if occasional gamblers save their spending on lottery tickets for 50 years, they will be able to buy a nice health insurance plan, active gamblers will be able to afford a compact City car, while lottery addicts may get a nice house instead of piles of useless lottery tickets in their trash bins. – By ThaiPBS World’s Economic News Desk