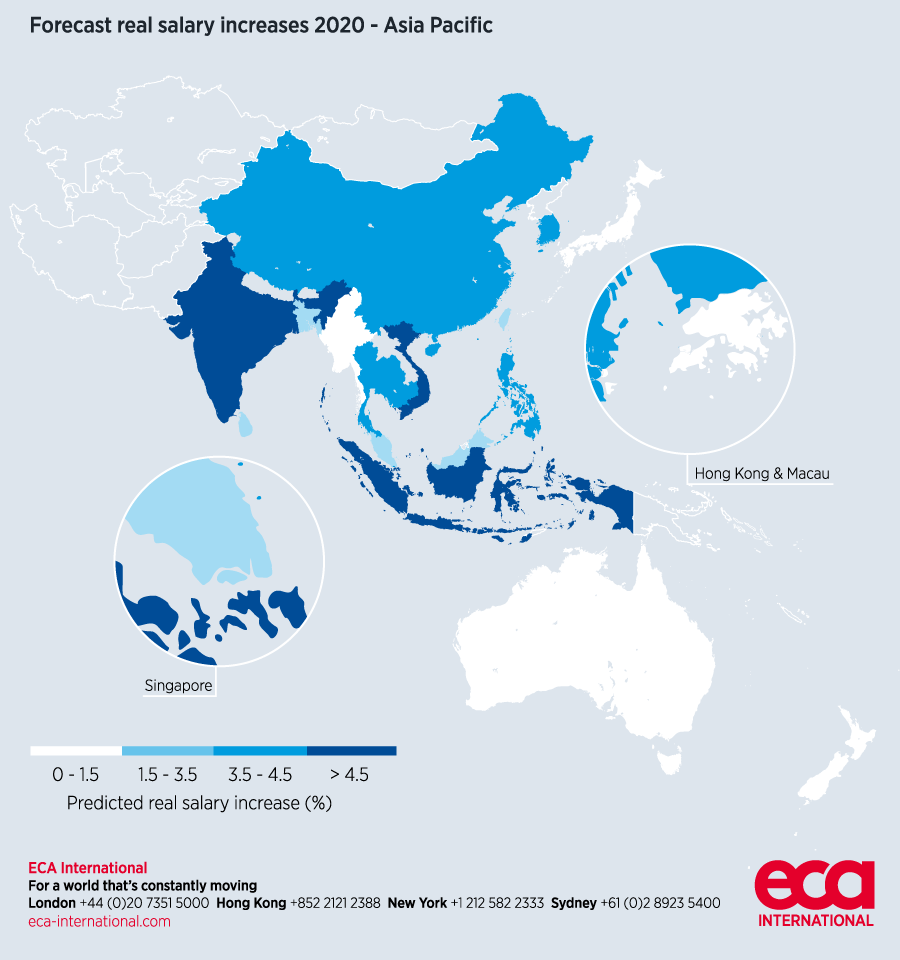 The emerging economies of Vietnam and Thailand both saw significant real salary increases, placing them in the global top five, with increases of 5.1% and 4.1% respectively, according to a report by ECA International.

“Workers in Vietnam and Thailand will both see further increases to their salaries as the nominal salaries expected to be given by employers stay well ahead of the low levels of inflation that these countries will see in 2020. This has been a long-term trend for both countries, as productivity continues to grow and inflation is controlled,” said Lee Quane, Regional Director – Asia at ECA International.

ECA International is the world’s leading provider of information, software and expertise for the management and assignment of employees around the world. The annual Salary Trends Report analyses current and projected salary increases for local employees in 68 countries across the world.

Asian nations lead the way again for salary increases – 13 out of the top 20 increases in real salaries have been observed in Asian countries, occupying the top five spots in the global rankings.

“Once again, the vast majority of the highest real salary increases in the world are predicted to be seen in Asia. The average real salary increase in the Asia Pacific region is forecasted to be 3.2%, which is significantly higher than the global average of 1.4% and nearly three times the European average of 1.1%. This is a trend that we have seen for many years now due to low inflation and rising productivity in many Asian economies, resulting in the rapid growth of salaries compared to other regions.”

The average real salary increase for workers in Singapore is forecasted to be 3.0% above inflation in 2020, a slight drop from the 3.3% increase that was seen in 2019.

Despite a nominal increase of 4.0%, employees will see an average increase of 3.0% after factoring in the predicted inflation of 1.0%. This places Singapore in 11th place in the Asia rankings.

“Although the forecasted real salary increase is set to be slightly lower in 2020 than the 3.3% Singapore employees saw in 2019, they will still see a larger increase than their regional neighbours such as Hong Kong, Taiwan and Japan,” said Lee. “The notably low level of inflation that Singapore has seen over the recent years, coupled with a tight labour supply and talent restrictions due to immigration constraints, implies that salary increases will remain relatively high.”

In China, the real salary increase is again expected to be above the regional and global average at 3.6%.

“Although there are signs that the Chinese economy may be slowing down in the face of the ongoing trade war with the US, wages and salary increases are still holding firm. China has also maintained its place in the global top 10 for salary increases.”

However, not all workers in emerging Asian economies will benefit from an above-average salary rise after inflation. Workers in Malaysia are expected to see a big drop in their real salary increases compared to previous years, down to 2.9% from 4.0% in 2019.

“Despite the forecasted nominal salary increase staying at 5.0%, inflation in Malaysia is expected to rise from 1.0% to 2.1% which will reduce the rate at which salaries increase in real terms for workers in the country. Although it is still relatively high, the predicted lower real salary rise for workers compared to 2019 has seen Malaysia drop out of the global and Asia Pacific’s top 10,” explained Quane.

Hong Kong among the lowest increase in Asia

Despite a nominal salary increase of 4.0%, workers in Hong Kong will only see an average increase of 1.4% in real terms even after considering the forecasted inflation of 2.6% – this represents one of the lowest increases in the Asia Pacific region.

Quane said, “Despite nominal salary increases staying at 4.0% next year, the predicted drop in inflation from 3.0% to 2.6% implies that employees in Hong Kong will see a slightly better overall salary increase in real terms this year.

Although this is still lower than the overall average in Asia Pacific, the fact that the nominal increase will remain at 4.0% in 2020, as it was last year, is surprising given the backdrop of the current economic situation in Hong Kong. However, this underlines the fact that many companies in Hong Kong need to continue to attract and retain staff even in this period of economic adversity for the city.”

“Salaries in India are expected to rise significantly – almost four times as high than the expected increase in Hong Kong. Despite inflation rising slightly from 2019 and the economy slowing, employees in India can expect to see another bumper increase to their salaries. However, unless growth picks up again, a salary rise of this scale may not be sustainable in the longer term,” said Quane.

Meanwhile, their neighbour Pakistan are predicted to experience a different scenario in 2020, as they are the only nation in Asia Pacific predicted to see a decrease in their real salary.

Quane explained, “The average real salary increase in Pakistan is forecasted to be -3.0%, meaning that employees will be worse off than they were last year. Despite the nominal increase staying at a relatively high 10.0%, inflation has shot up as the rupee has depreciated. Inflation in Pakistan is forecasted to reach 13.0% in 2020, exceeding the nominal increase and leaving workers out of pocket compared to 2019.”

A New Framework for Corporate Activism