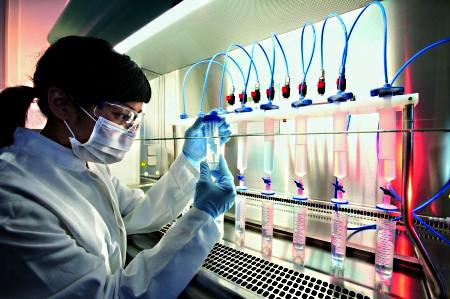 Thailand’s biotechnology industry is coming of age, as government efforts bear fruit, scientists achieve research breakthroughs, and investing entrepreneurs gain profits. No longer a newcomer to the field, the country is today regarded as fertile ground for considerable bio-tech research, investment and production, with achievements positioning Thailand as one of the world’s leading providers of resistant rice, advanced medical care, and biofuel, among other milestones.

Investors and industry experts worldwide are impressed by the count ry’s increasing number of biotech accomplishments. For example, a strong indication that the global community recognizes Thailand’s biotech capability came when the World Health Organization (WHO) approved the country as a manufacturer of the H1N1 fu vaccine.

“This showed that our biotech industry has a high standard and high readiness,” said Ajarin Pattanapanchai, deputy secretary general of the Thailand Board of Investment (BOI). “Our work is trusted by the WHO.”

Further evidence to this, Thailand has recently become one of two countries to develop an endoscope scanner for near real time detection of nearly all types of early stage cancers. The first scanner is expected to be in use by next year.

Nearly 100 biotech companies have been established in Thailand since the year 2000. The country’s rich agricultural background helps feed development of the industry. In fact, Thailand is one of only fve net exporters of food among countries in the world.

The nation offers biotech investors a solid R&D and manufacturing infrastructure, and a skilled but affordable force of laboratory scientists, field technicians and plant workers.

Enterprises on different scales have been experiencing significant growth since their start-up phases, with I+Med and Greater Pharma among the success stories. The government’s SME Fund has helped many of the ventures secure frm footing.

Although still an industry with much room for growth, biotechnology is important to the future of the country, as each breakthrough enhances Thai land’s global competitiveness, particularly in sectors such as agriculture, food and medical service.

Many government bodies have joined hands to strengthen the biotech industry in Thailand. Among them, the BOI, the principal government agency for encouraging investment, under the Ministry of Industry, has been active in granting incentives to promote biotech projects. Since 2008 alone, eight new biotech projects worth 268 million baht have been given the green light for BOI benefits. Pharmaceuticals are prominent on this list.

The BOI provides special incentives to activities that involve high-level R&D and product ion in four main areas. These are seed, plant and animal improvement, biopharmaceuticals such as drugs and therapeutic proteins, diagnostic kits and reagents for health, agricul ture, food and environmental applications, and bio-molecules and b i o a c t i v e c omp o u n d s such as enzymes and monoclonal ant ibodies. Incentives are both fiscal and non-fscal, and include exemption of import duties on machinery, a corporate income tax break, the go- ahead to bring in foreign ski l led technicians, and permission to own land.

The Thailand Science Park, which like BIOTEC is actually one of the centers under the NSTDA, covers 80 acres populated with laboratories, incubator units, pilot plants and greenhouses. Located 20 kilometers outside of Bangkok, the world-class facility mainly conducts R&D in bio-genetic engineering. There are more than 1,600 full- time researchers at work in the park. Among its features attractive to investors are long-term land leases for construction and ready-made wet-labs for rent.

As a positive parallel, headway in related industries is indeed helping to fortify Thailand’s emergence as a major biotech hub, with the country being a world leader in agriculture, food exports and medicine. The reverse is also true as local breakthroughs in biotechnology make industry and living standards better. The Thai food sector, for example, uses biotech advancements to continually improve plant and livestock breeding, rice, cassava and shrimp output, testing and product quality.

Lively R&D, in fact, has led to nearly 500 biotech patents being granted so far in Thailand, with the medical sector currently holding three times more than other areas. Food, agriculture, industry, the environment and energy follow.

Thailand’s Credit rating Down to Negative