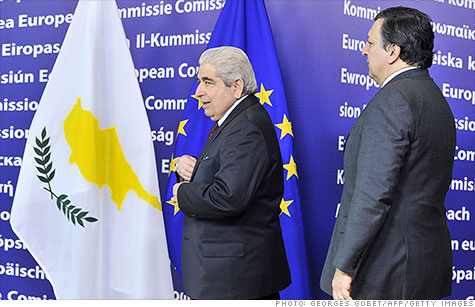 The Republic of Cyprus said in a statement that it had informed European authorities that the government would request “external financial assistance” from the European Financial Stability Facility or European Stability Mechanism.

“The purpose of the required assistance is to contain the risks to the Cypriot economy, notably those arising from the negative spill over effects through its financial sector, due to its large exposure in the Greek economy,” the government said in a statement.

The move makes Cyprus, an island nation in the Mediterranean, the fifth euro area country to seek financial rescue. It will join Greece, Ireland and Portugal, which have all received bailout funds from the EFSF.

Spain, which recently asked for help recapitalizing banks, is also in the process of negotiating up to €100 billion worth of loans.

Cyprus, which has just over 1 million people, is by far the smallest euro area nation to seek a bailout. But the request could add to concerns about the resources Europe has to fight financial contagion.

The Cypriot government did not specify how much money the country would request, but analysts say Cyprus needs about €4 billion.

In contrast, Greece has received two bailouts that were each worth more than €100 billion.

Earlier Monday, Fitch downgraded Cyrus’s credit rating to ‘BB+’ from ‘BBB-.’ Fitch said the downgrade reflects a “material increase” in the amount of capital Cypriot banks will need to cope with exposures to Greek households and businesses.

The top three Cypriot banks could need up to €4 billion in additional capital, which is equal to about 25% of the nation’s overall economy, according to Fitch.

“Cypriot banks will require substantial injections of capital in order to secure confidence in their financial viability,” Fitch said in a report.

Meanwhile, the Cypriot government has been struggling to borrow money at affordable rates in the bond market.

Fitch said the “fiscal cost” of bailing out Cypriot banks could reach €6 billion. That would drive the government’s debt level to 100% of gross domestic product, compared with Fitch’s previously forecasted 88%.