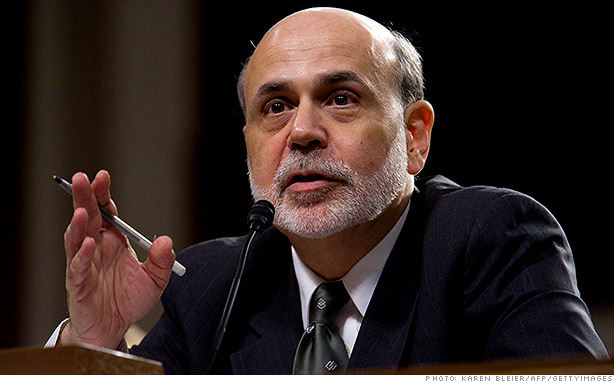 Once you get past the QE3 smoke and mirrors, Fed chairman Ben Bernanke doesn’t have much magic left to fix the economy. For the past few weeks, the market has been off to see the wizard, the wonderful wizard of the Fed. But traders who’ve been following the yellow brick road in the hopes of more stimulus came away disappointed Tuesday.

Fed chairman Ben Bernanke, aka the man behind the monetary policy curtain, conceded in semi-annual testimony before the Senate Banking Committee that he’s not really all that great and powerful. Bernanke did not give any overt clues in his testimony, or in response to questions from lawmakers, that the Fed was looking to make a significant move anytime soon. Stocks bobbed up and down as a result.

But it makes sense for Bernanke to not drop any explicit QE3 hints. The Fed has reached its limit as to how much more it can do to get the stumbling economy (especially the job market) back on track. Why on Earth (or Oz) do we need the Fed to buy more Treasury bonds or other assets?

The Fed has already done two rounds of so-called quantitative easing and is in the middle of another bond purchase program, known as Operation Twist. Despite that, the unemployment rate is still north of 8%. Bernanke said Tuesday that the jobs recovery is “frustratingly slow.” Why should anyone get their hopes up that the third time would be the proverbial charm and that QE3 would push the economy into hyperspace when QE and QE2 failed to do so?

More bond buying would only be needed if the U.S. were in a situation like Greece, Italy or Spain and persistently high interest rates were crippling our economy. Last I checked, the 10-year Treasury was yielding 1.49% … only a few basis points above the record low!

Interestingly, the bond market’s reaction to Bernanke’s testimony was far more muted than the stock market’s. Fixed-income investors don’t seem to fear that there will be a huge sell-off in Treasuries if the Fed is not there to prop things up with more QE.

Interest rates are not the problem. Nobody who wants to buy a house can claim that mortgage rates are too high. No business that might be interested in taking out a loan from a bank or sell debt in the public markets is going to lament that borrowing costs are punitive. Come on!

How low do we want rates to go? Below 1%? So we can be more like Japan … the nation that Bernanke has criticized in scholarly papers and speeches as a Fed governor for not doing enough to tackle deflation?

Now is not the time to push interest rates down further. What is the market so afraid of? It’s not as if the Fed is the only willing buyer of long-term Treasuries out there. The latest figures from the Treasury Department (released Tuesday morning) showed that both China and Japan (among other nations) boosted their Treasury holdings in May.

What’s more, average investors have been pulling money out of stocks pretty much all year and plowing cash into fixed-income funds, many of which are investing in Treasuries. Can you say bond bubble?

Consider the risks of more stimulus. Inflation will eventually rear its ugly head, even if consumer prices still remain in check for the time being. You can’t print this much money for such a long period of time without eventually devaluing the dollar. The saving grace for the Fed right now is that for all of the fiscal and macroeconomic challenges that the U.S. is facing, much of Europe is still in infinitely worse shape.

The dollar and Treasury bonds are alluring to investors around the world not so much because America’s economy is in great shape but because it’s the best alternative of all the most liquid evils. (But talk to me in a few years and we’ll see if that’s still the case when China’s yuan might finally  be able to step into a role as a true option as the reserve currency of choice.)

Bernanke shouldn’t risk the long-term health of the greenback just to make some myopic trader looking for more easy money happy. The solution to the economy’s woes lies in changes to fiscal policy, not monetary policy. That is why it is right for Bernanke to continue pressing Congress to do something to fix the economy.

The Fed cannot use smoke and mirrors to make the fiscal cliff go away. It can’t unilaterally extend lower tax rates and suspend looming automatic budget cuts. The Fed really can’t do much more.

The economy is not likely to start recovering until politicians show some leadership and put the good of the country ahead of their re-election campaigns.

If Bernanke is really now just a powerless wizard, Congress is the Wicked Witch of the West.