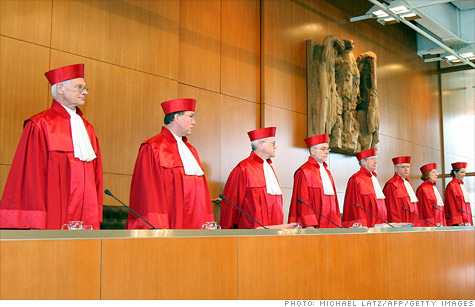 The centerpiece of Europe’s latest effort to stabilize the euro currency union is now in the hands of a panel of German judges. The German Federal Constitutional Court, or Das Bundesverfassungsgericht, is not expected to issue a ruling on the legality of the European Stability Mechanism until mid-September.

That means key parts of the rescue plan European Union leaders announced last month, including steps to support struggling euro area governments in the bond market, will be on hold in the meantime.

The ESM is a permanent bailout fund that will have a maximum lending capacity of €500 billion. It is designed to replace the European Financial Stability Facility, which has backed bailouts for Greece, Portugal and Ireland.

The German parliament approved the ESM in June, but the court has been asked to grant an injunction barring ratification of the fund’s treaty pending a full review of its legality under the German constitution. The court said Monday that it will make a decision on the injunction on Sept. 12, according to German press reports.

The court is also expected to weigh in on the so-called fiscal compact that German Chancellor Angela Merkel and most other EU leaders signed in March.

Critics say ratifying the fiscal compact and ESM treaty would require Germany to sacrifice too much sovereignty and put taxpayer money at risk.

German finance minister Wolfgang Schäuble has urged the court to move quickly, warning that a delay could upset financial markets.

“The new bailout fund is now firmly on ice for the coming two months at least,” said Chris Scicluna, head of economic research at Daiwa Capital Markets. “That leaves the Eurogroup with merely the leftovers of the EFSF available to meet any new challenges that might arise between now and the autumn.”

The Eurogroup, which brings together finance ministers from all 17 euro area nations, will hold a conference call Friday to discuss the terms of a proposed bailout for Spanish banks.

At its last meeting on July 9, the Eurogroup agreed to disburse an initial €30 billion by the end of the month, pending approval by euro area parliaments. Those loans will be made by the EFSF, since the ESM does not exist yet.

“The failure of governments to establish a common facility to recapitalize banks sets up a failure of the Euroland economy,” said Carl Weinberg, chief economist at High Frequency Economics, a research firm based in Valhalla, NY. “With no policy action in sight, stocks will fall, the euro will sag and yields on the safest bonds will rally.”

Investors are concerned that Italy, the third-largest eurozone economy, will not follow through on proposed reforms once Monti steps down next year.

While the court is expected to eventually approve the ESM treaty, it may demand that German lawmakers have more authority over how the funds are used, according to Nomura Securities analyst Alastair Newton.

In a recent research report, Newton noted that seven other eurozone governments have yet to ratify the ESM, which had been scheduled to launch on July 1.

The court’s decision could be “decisive” because the ESM cannot operate until 90% of its backers have signed on, said Newton. Germany will contribute 27% of the fund’s resources.

Yet the debate over Germany’s commitment to the fiscal treaty could be even more contentious, Newton added. The treaty requires governments to balance budgets and face penalties for failing to meet deficit targets.

“We therefore expect that, on top of all the other areas of uncertainty, legal issues will continue to hamper stabilization of the eurozone for some weeks — if not months — to come,” said Newton.

The not-so-great and powerful Ben Bernanke