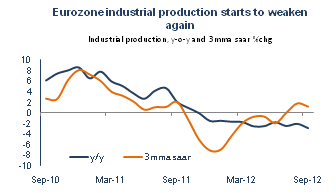 The gauge bounced back from a two-month closing reached yesterday, with Chinese and Taiwanese shares rising 0.4% and 0.3%, respectively. In contrast, the benchmark indices in Brazil and Russia declined.

Financial Markets…Germany’s government sold €4.3 billion ($5.5 billion) of 2-year bonds at a negative yield of minus 0.02% the second time on record and down from 0.07% when comparable debt was auctioned last month, amid strong demand for the nation’s debt. The first negative yield debt was sold in July.

High-income Economies…Retail sales in the US fell 0.3% (m/m) in October, the first monthly decline in four months, following a 1.3% increase in September, partly due to the disruption caused by hurricane Sandy which hurt sales in some parts of the US, but also from consumers’ concerns that taxes could go up next year as part of negotiations to avoid the US “fiscal cliff”.

Euro Area industrial production fell 2.5% (m/m) in September, the most in three years, following a 0.9% increase in August, amid a weakening Eurozone economy and fiscal austerity that have cut into demand. The fall in Eurozone output was led by double digit declines in Ireland (-12.6% m/m) and Portugal (-12% m/m), but industrial output in core economies Germany and France also fell, by 2.1% and 1.8% respectively. On a quarter-over-quarter annualized basis, Eurozone industrial growth slowed to 1.2% (3m/3m saar) in September from 1.8% in August.

World’s Economies Come of Age: BRICs are Aging Too