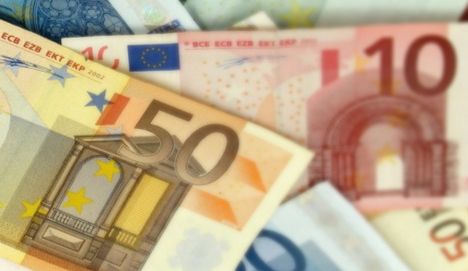 The euro came under further selling pressure in Asia Thursday owing to concerns about Cyprus as it prepares to reopen its banks after the weekend bailout, while political uncertainty in Italy also weighed.After dropping below $1.28 for the first time in four months on Wednesday, the euro fetched $1.2785 and 120.33 yen in Thursday morning Tokyo trade, compared with $1.2779 and 120.63 yen in New York a day earlier.

The greenback also weakened to 94.10 yen, from 94.40 yen ahead of a Bank of Japan meeting next week that is expected to see the launch of more aggressive easing by the central bank.Cyprus confirmed banks will reopen on Thursday after a nearly two-week lockdown during which Nicosia agreed a bailout with its creditors that will see bank deposits above 100,000 euros hit by a one-off levy.

The lenders will open at 1000 GMT but only under draconian capital controls, the first of their kind in the 17-nation eurozone.

In Italy centre-left leader Pier Luigi Bersani is struggling to establish a governing coalition a month after indecisive elections, raising concerns about stability in the country, which is enduring its longest recession in decades.”Rising eurozone angst is front and centre of the market radar,…