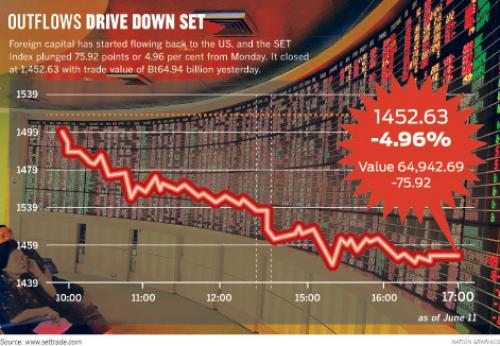 Stocks were heading down in most Asian countries, following a selling trend of foreign investors. Thailand, Indonesia and the Philippines bourses nosedived amid worries about the prospect of fund outflows, with the Thai main index seeing its sharpest one-day loss since October 2011.

Thailand and the rest of Asia are bracing for more volatility, as foreign capital started to flow back to the United States on the back of improvements in some economic indicators. This comes at a time when Thailand is facing internal risks, from the rice-pledging scheme to intensifying anti-government sentiment.

The plunge in the index prompted SET president Charamporn Jotikasthira to urge investors to stay calm.

Asian stock exchanges ended lower yesterday because of foreign sell-offs. On average, Asia-Pacific bourses showed a 0.7-per-cent slide. Leading the pack was the SET Index, which dropped 4.9 per cent (75.92 points), the most since October 2011, to 1,452.63. Trailing the Thai bourse were the Philippines, which plunged 4.6 per cent, and Jakarta, down 4.2 per cent.

Yesterday, foreign investors were net sellers on the Stock Exchange of Thailand, with their sells reaching Bt5.48 billion. Since June 1, net sells have been Bt28.19 billion, and the year-to-date figure is Bt49.28 billion.

He said foreign investors moved their capital out of the country after profiting in the Thai stock and bond markets in the last few years.

At least US$12 billion in foreign capital was transferred into Thailand since late last year for short-term investment, consequently putting pressure on the baht which successively surged to Bt28-30 against the dollar, he said.

Mr Kittiratt said it would be unnecessary for the government to implement some of its fiscal measures but all parties concerned have yet to closely monitor the economic situation.

A Krungsri Bank foreign exchange trader this morning said the baht was at Bt30.93/95 against the dollar, adding that it was the weakest in eight months when it recently slipped to Bt31.03/05 against the greenback.