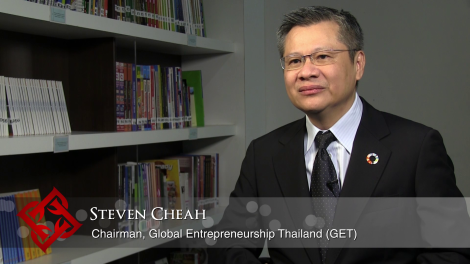 What is Global Entrepreneurship Thailand (GET)?

What is Global Entrepreneurship Week?

CHEAH: Global Entrepreneurship Week is a campaign that was started in 2008 by Gordon Brown, at the time the Prime Minister of the UK, in partnership with the Kaufman Foundation, which is the largest foundation devoted to entrepreneurship in the world. Every year in the 3rd week of November all of the participating countries, we have 138 participating countries, encourage all of these partners to put on events for their communities. So you have a week of campaigning all around the world, estimated at about 35,000 activities going on at the same time during the same week reaching hundreds of millions worldwide. So this campaign is the world’s largest campaign to promote entrepreneurship.

Who are your major corporate supporters and partners in Thailand?

CHEAH: In Thailand, we have a couple of supporters and partners. There are a couple of different categories. Anyone who puts on events and registers with us is considered a GEW partner. Anyone who supports us with common goals we call supporters. Obviously, we have sponsors who help to pay for events and so on. This year we have a major sponsorship from the Minor Group, who owns a great deal of brands here in Thailand. We have a campaign called ‘Go Viral’ and basically the whole idea is to inspire young people to think like entrepreneurs and if they owned a brand, what would they do to promote the brand. We want to, throughout the nation, get people to think like entrepreneurs and pretend they own the brand and create something for it. We have a lot of support from other organizations, from government agencies, and from private organizations. We have the Bangkok Metropolitan Administration (BMA), the Office of SME Development, the Joint Foreign Chambers of Commerce, which consists of 27 chambers, we also have SIPA, the Software Industry Promotion Agency, and so on.

Is there adequate angel and venture capital in Thailand to sustain entrepreneurship?

CHEAH: I would say yes and no and it is a bit more complicated than that. There is a lot of interest to invest in start-ups in Thailand. It has been very difficult so far for venture capitalists to invest in companies because the whole ecosystem in Thailand doesn’t really support that kind of set up. The whole ecosystem needs to start evolving to support the idea of venture capital companies coming in or any investment coming into Thailand. There are some companies that have done it, but they really have to set up and monitor the situation and they really have to understand the whole culture. It is not like in America in Silicon Valley where the whole culture has been set where people come in and put in money and they know where it is going and there are benchmarks and ways of monitoring. Thailand still has to develop that system.

What is the dynamic between Thailand’s public and private sector with regard to entrepreneurship?

As far as the banks are concerned, it is still a problem to get financing for start-ups. Banks do not have a proven record in their attempts to fund start-ups and they are still unsure about the future; this is all very uncharted territory in Thailand. So the government has been doing a lot to try to encourage more start-ups and encourage more SME loans and so on. I do not have the latest statistics, but it is a challenge the government is still facing. The intention is there, but as far as the practicality of funding start-ups and making sure that they do incubate and do grow, it leaves a lot of issues yet to be answered.

How would you describe the culture of creativity and innovation in Thailand?

CHEAH: Creativity in Thailand is an asset to the country. We have in many instances Thai companies and individuals demonstrating a lot of creativity and innovation in their work and arts. What the government of Thailand has done is recognize the importance of innovation and creativity in the community. This is an area where we are seeing a lot of growth. So there is a lot of development in trying to set up and encourage an ecosystem whereby creative arts or any form of creative business can work in an environment where the business or ideas can be nurtured. In Thailand, more than 10% of the GDP comes from creative industries, from the furniture business to art and design and so on. There is still a lot more room to grow. We are focusing our efforts into fostering creativity in Thailand.

Global Entrepreneurship Thailand (GET) Chairman Stephen Cheah on the entrepreneurial ecosystem in Thailand is originally published by and copyright of The Prospect Group.