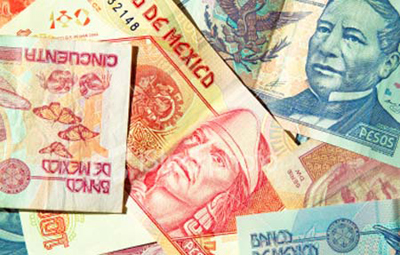 The Mexican peso outperformed its Latin American peers in 2013 as investors anticipated the region’s second-largest economy will benefit from key structural reforms at home and a steady economic recovery in the United States, its top trading partner.

Even as other Latin American currencies weakened about 10 percent so far this year, the peso on Monday was on track to close the year with losses of only 1.6 percent.By contrast, the Brazilian real slid over 13 percent in 2013 as worry about the deterioration of Brazil’s economic fundamentals amplified the negative impact of the US Federal Reserve’s decision to start cutting back on stimulus.

Anxiety about the timing of the Fed’s move was the largest drag on Latin American currencies this year. With the US central bank poised to start winding down its $85 billion-a-month bond-buying program by an initial $10 billion in January, market attention has shifted to the pace of future stimulus cuts.

With less dollar liquidity in global markets and US Treasuries yields expected to rise, investors will likely differentiate between improving and deteriorating emerging market economies next year, analysts say.

Read more from the original source:
Mexico peso shines among Latam currencies in 2013