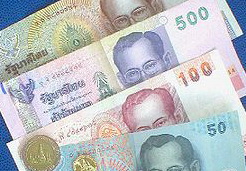 Thailand’s policy interest rate is likely to edge up by 0.50-0.75 per cent or so in the second half of this year given the higher inflation rate and the ongoing economic recovery, according to a top banker.

Prasarn Trairattanaworakul, president of Kasikornbank, said the Bank of Thailand (BoT) Monetary Policy Committee is projected to keep the policy interest rate unchanged at 1.25 per cent through the first half of the year since the monetary policy adopted by many countries continues easing.

Here is the original:
Policy interest rate set to climb slightly after mid-year

Government debt-to-GDP remains below average regionally speaking, the financial sector learnt from the 1997 meltdown and remains relatively well capitalised and liquid, and Board of Investment privileges are some of the best in Southeast Asia.

Many of tax privileges were scheduled to expire at the end of this year, but now extended for another one to three years, depending on whether such tools and equipment can be currently locally produced. The government also cancels many parts and components required in assembling chasses used in vehicles that are fueled entirely by natural gas.
Externally, the trade balance in January 2009 recorded a 1,688 million US dollar surplus. Export value contracted for the third consecutive month while import fell even more rapidly. Export value dropped 25.3 percent (yoy) to 10,382 million US dollars. This was due mainly to contraction across the board except for labour-intensive industries which still expanded from gold export. Import value contracted 36.5 percent (yoy) across the board to 8,694 million US dollars. When accounting for the net services, income, and transfers surplus of 601 million US dollars from lower investment income transfer compared to the previous month, the current account balance registered a 2,289 million US dollar surplus.

Thailand’s exports this year expected to grow 15% in 2010