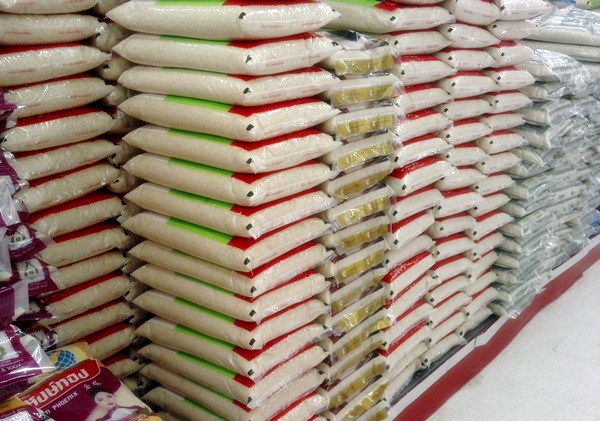 The Thai government will limit the amount of rice it buys from farmers during the forthcoming off-season crop, a move that traders and industry officials said was forced because it is running out of warehouse space and costs are rising.

The Commerce Ministry has asserted its determination to carry out the state-sponsored rice-pledging scheme to help small farmers.

Permanent Secretary for Commerce Ministry Vatchari Vimooktayon, on Monday, revealed that the latest round of state-initiated rice-pledging scheme has experienced no hurdle, to date.

Mrs. Vatchari stated that while most participating farmers have received their money as promised, some might see some delays caused by procedural complication.

She assured that related ministry officials have been urged to speed up their work to allow farmers to get the money as soon as possible.

The Permanent Secretary for Commerce Ministry also stressed that each participating farmer will be allowed to pledge their paddies for the maximum worth of 500,000 baht, as the scheme is intended to help small growers to get by.

Mrs. Vatchari added that more measures have been implemented to prevent subrogation.

She went on to say that the sales of paddies pledged with the government will be gradually made while reckoning that the Commerce Ministry will make enough money to completely pay up the Bank for Agriculture and Agricultural Cooperatives, which has paid participating farmers, as planned.

The Commerce Ministry’s Permanent Secretary also assured that there are not a lot of pledge paddies in the state stock and that the government will not lower prices despite pressure from buyers.

The cabinet on Sunday agreed to guarantee a 105 billion baht (US$3.59 billion) loan to the state-owned Bank of Agriculture and Agricultural Cooperatives (BAAC) to enable it to carry on paying farmers 15,000 baht per tonne for paddy, around 50 per cent above the market price.

“The government has had to make some changes on the policy otherwise it wouldn’t be able to go on any more with the costly scheme,” said Vichai Sriprasert, honorary president of the Thai Rice Exporters Association.

The buying program, based on campaign promises from the July 2011 election, has raised rice stocks in Thailand to record levels and made export prices for the grain uncompetitive. The scheme has also cost Thailand its post as the world’s top rice exporter, a spot it had held for three decades until last year.