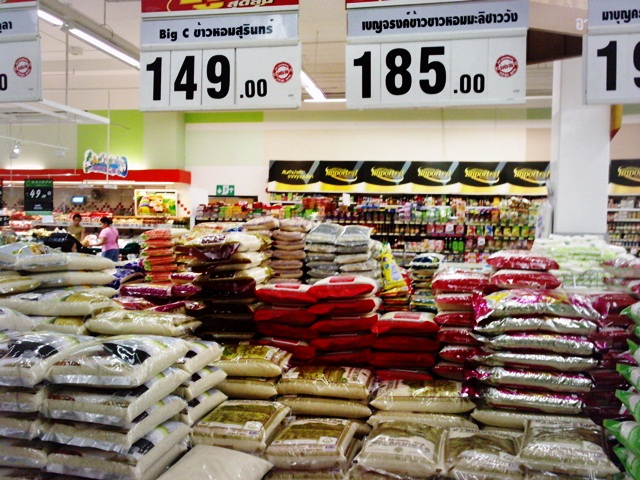 Thailand’s National Rice Policy Committee (NRPC) has cut the pledging price for paddy from Bt15,000 per tonne to Bt12,000 per tonne, effective June 30, and set the subsidy ceiling at Bt100 billion a year, according to Commerce Minister Boonsong Teriyapirom.

He said farmers can sell their paddy for a maximum Bt500,000 per household, beginning tomorrow, adding that the government will allow losses from the rice pledging scheme at not more than Bt100 billion a year.

According to US FDA, Thailand in now sitting on a pile of 17 million tons of rice

The stricter measure was imposed after official figures showed Bt136 billion in losses from the Commerce Ministry’s paddy purchase from farmers in the 2011/2012 harvest season, he said.

Mr Boonsong said a survey by the Agriculture and Agricultural Cooperatives Ministry found rice planting costs at Bt8,000 per tonne while farmers will make almost 40 per cent profit after selling paddy at Bt12,000 per tonne.

The NRPC also assigned the commerce, agriculture and agricultural cooperatives and finance ministries to jointly find ways to reduce operating costs for the pledging scheme while pledging price for the next harvest season has yet to be fixed, he said.

About 10 million tonnes of paddy will be purchased from this year’s second harvest, between April 1 and October 31.

The Thai Farmers Association, meanwhile, called on the NRPC to review its decision and asked the government to continue the rice pledging scheme for the next five years.

Vichien Puanglamchiak, association chairman, said farmers will submit a letter of protest to the government and may organise a demonstration if the government stands firm on reducing the pledging rice. (MCOT online news)