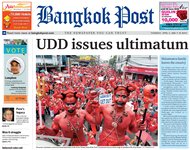 Bangkok, 11 May 2010 NNT – Post Publishing expands its business target by co-producing news with Channel 11 NBT, hoping to increase more rating as well as to compete with other leading channels. Editor in chief of The Post Publishing Public Co. Ltd, Mr Pichai Chuensuksawadi states that globalization has created a world which is more integrated and interconnected than ever before which makes news able to be broadcast at an instant it happens through all types of media.

Therefore, it is significant to adapt media broadcasting strategy to suit with the viewer’s needs. Mr Pichai further stated the main objective that Post decided to join and produce news in Channel 11 as the result of the long term strategy that the company had made many years ago. The company has set its goal not to be just a single newspaper, Bangkok Post; but to be a company which provides news in multiple platforms.

Mr Pichai added that viewers would be able to see a new style of news broadcasting from Channel 11 such as more intensity of news in newspapers style on television. Moreover, he elaborated that the visual and graphic would also be changed. The Post Publishing Public Company Limited won the 1-year contract from the Public Relations Department to provide news content to Channel 11, starting from 11 May 2010 onward.

via Post Publishing to launch a new form of news broadcasting on NBT, starting from 11 May : National News Bureau of Thailand.

Thailand’s Journalists under attack, reporting brought to a halt

Can Thailand’s Economy Survive its Politics?